there is some data out on the top 10 grossing console, PC and mobile games in the market, Wargaming is in the list: 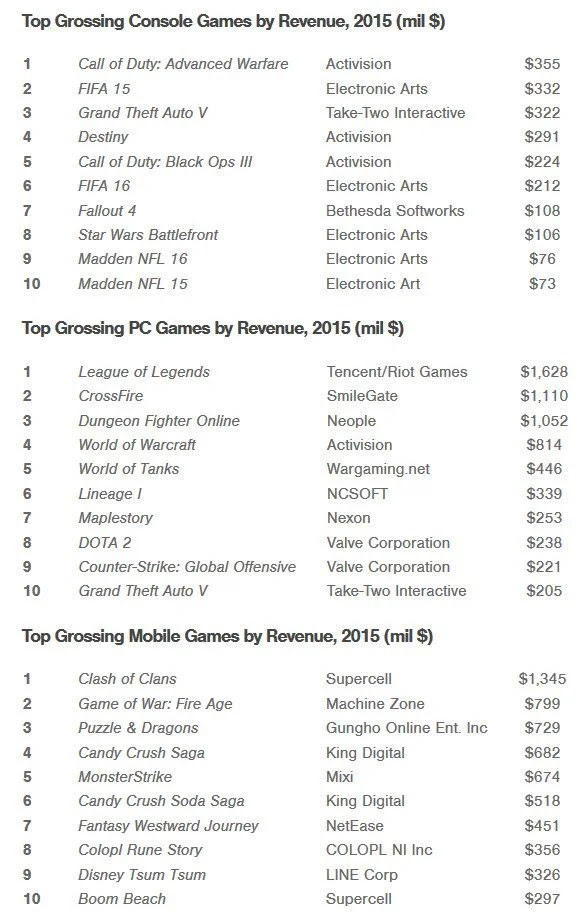 "In 2015 the worldwide digital games market totals $61B across platforms, up 8% year-over-year. Following a stellar holiday season for the games industry, total sales reached a record high in 2015. Sales of digital console games showed the biggest jump and were up 34%, despite being one of the smaller categories at $4B annually. The largest category in terms of dollar sales was mobile, earning $25.8 billion and up double digits (10%) from the year before. Sales figures points toward a shift in the industry as more consumers have adopted digitally distributed games and free-to-play. However, not all segments were posting positive numbers, as social games remained largely stable (-0.8%) and subscription-based gaming continue on its downward spiral (-4%)."


I was checking the data from 2013 and 2014, Wargaming always been in the green light, this year wasn't an exception although Wargaming has admitted that with the meltdown of the Russian market things weren't so easy, the Russian team had to come up with ways to reinvent the game to attract RU players back to the game as well as improve retention of existing players.
And note, this are just earnings from World of Tanks PC, it doesn't a account for their other products, in 2014 WG made in total 500 Million US Dollars and the prediction for 2015 was 590 M $.


Apart from that, on the console department, I was expecting Star Wars Battlefront III to make more revenue, I personally waited nearly 10 years for that game and ended up not buying it, is just too sad seeing Stormtroopers bunny hopping and I feel the game should have been called Counter-Strikes Back!
Also seems like middle age moms and the casual kids which vocabulary range can only complete the "Do you have games on you phone?" phrase are still keeping mobile games strong.