A little bird is claiming that these will be the new crew portraits for the 9.7:

I particularly like the German...
Posted by Unknown at 19:07 No comments:

- Storm states that it is not true that Severogorsk and Northwest maps were fine at first and that they only got worse and and worse after WG "improvements" - according to him even the first versions were really bad when it comes to heat maps;
- Apparently, 9.7 has a nasty bug where multiple players see individual missions they completed previously as incomplete (and unavailable), Storm will investigate;
- The AMX-13/75 buff doesn't concern only the gun but the entire tank;
- Multicore support? "We are working on it in parallel" - "when it's done it's done";
- Developers haven't forgotten the Stronghold mode, upgrades (for example the special magazine) are being developed;
- According to Storm, IS-4 armor in 9.7 is correct;
- There are no plans to abandon the Scaleform UI;
- There are no plans for accuracy buff for near future;
- There are no plans to sell the M56 Scorpion at all, it will be obtainable through missions;
- All the vehicle classes are being re-balanced to fit more their intended roles, this is an ongoing process;
- It's possible to use twinks in order to get into the "newbie" low tier matches, but: "what will it give you? Games with an untrained crew but with personal experience? Enjoy!"
- It's not possible to limit noobs from playing high tiers: "in such a case, very few people would play tier 8-10".
Posted by Unknown at 18:23 No comments:

check this out: this is the restored T-70 Soviet light tank, a property of the Vsevolzhsk museum. In case you are wondering how much such a vehicle costs - its price is 5.000.000 rubles (cca 90k EUR)

a little Q&A from Storm.

- Q: "Why did you rework to HD the tanks first and not the maps?" A: "Because it's a tank game. Seriously."
- It is now Storm's opinion that there should be the option for some players to download ultra-HD textures even though most will not use them;
- Artillery will be rebalanced this year apparently - and by rebalance Storm mentions real rebalance, not nerf, with possible changes to the artillery mechanism. The insider adds that the new mechanism is apparently inspired by the Armored Warfare artillery;
- Storm states that the rebalance (nerf) is the only correct way how to regulate the amount of (overpowered) class vehicles in battles, not hardcap;
- For Storm, the most important part of the 9.7 patch is the BigWorld upgrade that allows WG to implement new features. On the other hand, Storm admits that there aren't that many new things for players in this patch - the French tanks and a new map;
- Storm states that patch 1.0 does not mean a "release" of the game, the game was officially released almost five years ago;
- North-West will be completely removed from the game ("shelved" is the term Storm used), it will not return this year;
- developers are discussing which maps to remove next (other candidates are Pearl River, Sacred Valley);
- Some players experience less microfreezes in combat in 9.7 - Storm states it's most likely the new Bigworld;
- Storm is aware of the bug where it takes way too long for LT's and arty to join combat, they are being blocked in the queue. The bug is being discussed, no solution yet;
- FV4202 switch will not come anytime soon;
- there are plans for AMX-13/75 buff.
Posted by Unknown at 11:29 No comments:

It is with regret that I must inform you that another distinguished veteran passed on on 21.4.2015 - Sydney Valpy Radley-Walters CMM, DSO, MC, CD. Radley-Walters was a renowned Canadian tank commander during WW2. 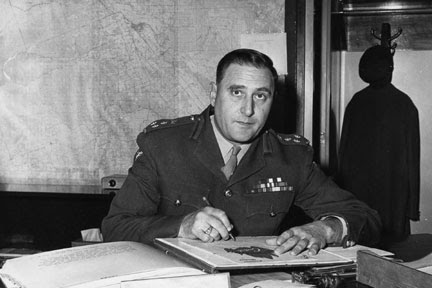 Brigadier General Radley-Walters was the top scoring tank ace of western Allies in WW2. He fought through Normandy all the way to Germany and continued his distinguished service until 1974 when he retired.