The tier 8 IS-5 tank will be obtainable via a clan wars event. This event:

- Will come by the end of May (or perhaps a bit later) on RU server (EU/NA are unclear);
- It will be a tier 8 event;
- It will likely be the last event before CW overhaul;
- It will take no more than two weeks;
- The IS-5 tank characteristics are final;
- IS-5 will be obtainable only by playing in a clan (it won't be sold or given for other events).


And because there wasn't much for today so I'm gonna leave this video here... a whole new level of "Unfair Plane Kemp Bush":

Already played this video some 5 times, cant stop laughing! (Thank you "Abdool" for sharing!)
Posted by Unknown at 17:20 3 comments:

Earlier this year when Armored Warfare opened the first Alpha test server the players expressed their distaste for the Artillery mechanics by stating that it didn't presented anything new in comparison from other games. Well, Obsidian did listened to the community and they made a number of changes, please be aware that this change may not be definite, they are making sure to make things as right and fair as possible.


You can read everything in detail here: http://aw.my.com/us/artillery-development-update

I've been playing during this Alpha testing phase and have to say that I'm very satisfied with the changes, also find them to be fair for both parties and even although I always keep myself moving in the battles, its very nice to have a warning that you are being targeted.

What is your opinion?
Posted by Unknown at 17:01 9 comments:

WG RU confirmed what was leaked earlier on: IS-5 tier 8 "premium" will be a clanwars exclusive tank. It will be possible to get it in an upcoming CW event. Boo...

as you probably already know if you read this blog, Yuri Pasholok recently visited the armor museum in Thun (Switzerland). Another remarkable vehicle that he saw there was the Panzer 58 Swiss medium tank. Here's some info about it. 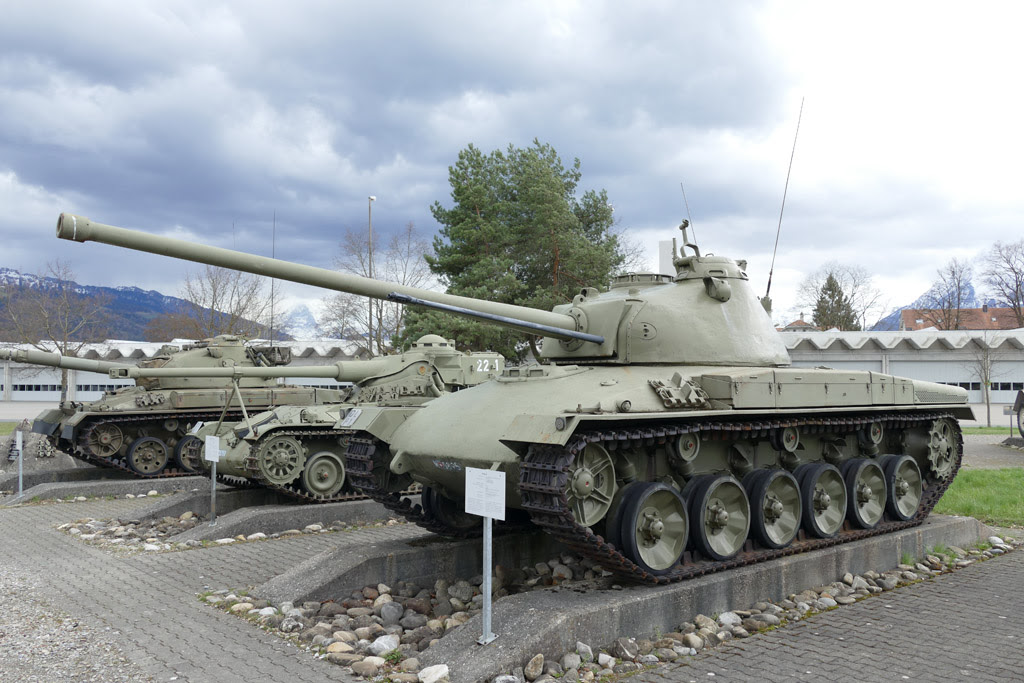 For numerous reasons (especially economical ones), Switzerland didn't have its own armored vehicles for a very long time, opting to purchase foreign vehicles instead. Switzerland is however now only known for its mountains and banks but also for its quality arms manufacturing industry (that includes not only guns and rifles), previously however there were no real indigenous Swiss tanks. There were attempts during and after the war to build indigenous armored vehicles (such as the Nahkampfkanone project) but it never really went anywhere, since it was much cheaper to buy the Centurions or the G-13 TD's than to develop a vehicle on their own.

This attitude changed in the 50's. It's no secret that Swiss arms companies (Oerlikon, Solothurn) actively cooperated with the Germans in WW2. This cooperation continued after the war and it started to include tanks as well. In 1953, an alliance of German companies (Porsche, Daimler-Benz, Zahnradfabrik and Ruhrstahl) participated in a project of a new tank for India. This was the 30 ton class Indien-Panzer that was to be produced in India by the Tata company. Swiss companies participated in the development of the Indien-Panzer as well. The project was ready in 1954 but the client refused it in the end. There was nothing wrong with the tank actually, but Tata was not able to actually produce it. After some deliberations, the Indians chose to simply buy the British Centurions instead.

a few answers from Storm and Evilly, includes the missing Q&A from yesterday (translator was not available).

- as a reaction to Armored Warfare video about the role of armor in AW, Storm states that armor does play a role in WoT even now and that its role will improve in the future
- Storm does not think that the War Thunder engine is better than Bigworld by the entire order of magnitude
- Q: "Check out how few battles Storm played." A: "Yea yea. That's the reason for all the problems in WoT." (later he adds that the has over 15k battles in WoT beta)
- +/-1MM will not be introduced
- BL-9 and other unhistorical top guns will not be removed from vehicles
- gold ammo will not become cheaper
- it's possible tier 9 and 10 guns will receive a penetration nerf
- Storm confirms: Super Pershing hull itself will have the angles partially changed and the additional plate angles will be changed as well
- according to Storm, all the versions of Super Pershing model until now had wrong armor angles, he hopes that this time, it will be correct
- unfortunately it's not possible to add AMX-50/100, IS-3 and Pershing HD models to the 9.7 patch despite all the delays
- final build of 9.7 is already made and is being prepared for release
- it is very possible (confirmed by Evilly as "more or less correct") that the tier 8 Kanonenjagdpanzer will replace the Jagdtiger 88, which will be removed from sales