Hello warriors, now that work is pretty much done decided to join my girlfriend WhiteIvy on her stream, we will be platooning with whatever she enjoy the most, come visit us:

Not much interesting today either. Obisidian Entertainment (AW developer) released the Pillars of Eternity RPG (Baldur's Gate 2 style, got very high reviews) - Storm tried it out and didn't like it very much apparently (but he stated he saw only the first two zones, which is basically just tutorial - when he was told to go on to at least the third one, he said he'd suffer through it).

What might be a bit more interesting for fans of new tanks in the game - you might remember from FTR that the drawings of the first Czechoslovak premium tank (Škoda T 40)  are ready, they have been for weeks and the new tank is already scheduled in modelling department. What you might find interesting as well is that the Wargaming drawings (basically modelling blueprints) of the first regular (non-premium tier 8) tank are now ready as well, the TVP Model 1946 (aka "TVP Concept"). Everything is well on its way. The Japanese heavies will come first though, likely around summer. Japanese heavy branch will be ushered by the "Japanese Tiger" premium (leaked not so long ago) and will consist of project of various levels of historicity. Tier 9 and 10 will be mostly Wargaming made, historically they will be based on very dubious materials, such as Russian transcripts of interviews with some Japanese soldiers and scientists. Very boxy designs with large guns (think E-100), possibly the largest tanks in the game.
Posted by Unknown at 19:39 22 comments:

In mid-50’s, a part of the Soviet army was having a look at their heavy tanks, analyzing their issues and drawbacks. One of the major issues of the heavies was their low rate of fire. The two-piece shells were quite slow to load, resulting in average rates of fire somewhere between 2 and 3 rounds per minute (compared to 6 to 8 rounds per minute of the medium tanks). This was especially true for the 122mm shells of the D-25 gun and ways were sought to remedy the situation. 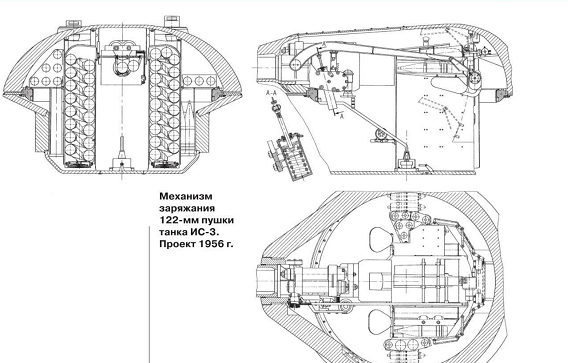 One of the solutions that presented itself during the research was to equip tanks armed with 122mm D-25 with some sort of automatic or semi-automatic loading system. The system however was quite unwieldy and since the loader still had to be present and the turret was not big enough, such a system could potentially lead to the reduction of the amount of ammunition carried.