the first part of the Cyprus meeting is finally completed, this is a resume of the conversation we had with Markus, Florian and Slava, tomorrow will start working on Viktor Kislyi's aka second part: 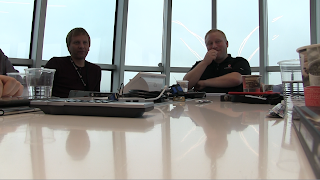 -If we stopped introducing content and made 2016 the year of fixes, would this be enough? - No.

-Although there was a lot of content released in 2015, Wargaming admits the regularity of the patch releases could have been more consistent.

-With the meltdown of the Russian market, the Russian team had to come up with ways to reinvent the game to attract RU players back to the game as well as improve retention of existing players and this obviously has a knock-on effect on content released everywhere else.

-The conversation group in consensus asked to bring back fun events (like Karl 8-bit and Chaffee Race) every 6 months (specially during IRL events like World Cup who tend to drain playerbase away) which was WG agreed with and will explore possibilities.

-Wargaming admits that Rampage mode its "not so good, to put it midly".

-Instead of keep on adding games, they want to focus in making the game better (fixes and tweaks of already existing content)

-When Artillery was initially introduced it was meant to stop camping and had Light Tanks and other SPGs as natural enemies but nowadays the biggest issue about it is that Light Tanks are obsolete and unable to spot/kill SPG due to corridor maps.