But Our Princess is in another castle!

first of all, the 9.14 Test Server First Phase is now over, Ph3lan from EU forums, as usual is giving more info than NA's staff:


Second, there will be a micropatch tomorrow, GhostPrime on the NA forums has said that it will only affect the West NA Server:

"There are plans to release Micropatch 9.13_6 on February 18th, 2016
The maintenance will begin at 3:30am Pacific Time (11:30 UTC) and will last approximately 25 minutes.
During maintenance, the World of Tanks West servers will be unavailable."

I've also noticed that tomorrow, RU servers will receive a maintenance of nearly 2 hours, I browsed around if EU is going to receive a server downtime as well but EU Costumer Service, who has somehow been able to not be completely useless after my rant, haven't said anything but I still don't trust them. I'm poking the EU staff that's still online at this hour and try to get an answer, if you don't hear anything from me it means that is just likely some isolated/geographical maintenances.

...And as I was about to click on "publish" after poking them, a magical announcement appeared:

On the 18/02/2016 at 05:30 UTC, the World of Tanks EU1 Cluster will be unavailable for approximately 25 minutes as we perform maintenance work.
Thank you for your understanding and patience.
Roll out!
Your Customer Service Team"

first of all, tomorrow the AW EU servers will be shut down for 2 hours, with the player increase the servers havee been getting some troubles and the company will reinforce them.


Anyway, there is a new Q&A from the US office:

What is the developer’s view on changing the class designation of vehicles whose playstyle does not match with its given designation?
While possible in theory, vehicle class is something carefully considered during the vehicle’s long development process. The general vehicle behavior can be determined before its actual introduction by looking at its real world characteristics. When determining vehicle class, we also look at the vehicle designation in real life. The Leopard 1 is a Main Battle Tank for example, even if it has relatively thin armor. When faced with a vehicle with characteristics that don't match the typical case for its real world designation, we look for ways to shape the vehicle as a hybrid of the class it fits into better. This is something that we intend to take further as we continue to evaluate how different vehicles perform within their designated classes.

Are there any plans to replace the active ability for tank destroyers?
Not at this time.


Will the Swedish AFV make an appearance?
In the future, yes.


Can we expect at some point that we will have different play style among MBTs? Now all of them have similar characteristics. It would be great to see some MBT with unique features such as very long reload and huge damage per shot.
Vehicles with extremely high damage per shot are something we are actively trying to avoid based on negative feedback from the Early Access phase and even the Alpha phase. While the notion of destroying enemy targets with one shot might seem entertaining at first glance, such unbalanced vehicles would have to be compensated by having poor armor and mobility. This results in gameplay which can be both frustrating for the player and their opponents. With that being said, the MBT class is actually quite diverse – on one hand you have thinly armored, but mobile MBTs such as the Leopards, all-rounders such as the Abrams, damage-focused tanks like the T-Series and heavily armored juggernauts such as the Challenger. We will continue striving to keep the entire class diverse enough for every MBT player to find vehicles which fit their preferred playstyle.

there is a New World of Ranzar, this time with a Swiss Bear:

FerrariHD has uploaded as usual his SD/HD model comparison for the next patch:

Finally finished compiling every little change from the current 9.14 TS patchnotes, its so methodical that when there is more Dev changes, its convenient and healthy that I take a rest half way as I literally check every module of every tank for you. It feels like the fricking Mirkwoods!
Oh and by the way.. even with the patch being delayed do expect these changes nevertheless.

For those new this is how it works:
-Module name: New Stats (Previous Stats)

here is the New World of Papoj, enjoy:


That god mode arty was painful to watch...

meanwhile in the Russian community, there is a whole novella taking place, where Wargaming developers passionately fight for power or to just not F*** things up any more. I translated it for you:

With Wargaming realizing how far they had slipped down and how the community reacted to it. Cof... Rubicon...Cof... They are now very cautious to not commit the same mistakes.

Wargaming wants to improve the quality of the upcoming patches and their first concern is to fix as much bugs as possible, also, Grille 15 have been postponed just like the FV2015 (b) replacement and the FV4202 was so bad the team had to improve it.

The company,  wants to fix all these issues and has pressed the panic button, Cyprus became disatisfied with Evilly (Anton Pankov)'s work mostly due to the adittion  of shitty Premium tanks (STA-2, Patton 59, etc), its uncertain but there is a possibility that he will be transferred to Cyprus (I doubt). There was also another power shift, Storm has been put aside and Slava Makarov, the guy who pretty much created World of Tanks has been hired back and given the reins.

Stay tuned for the next episode of Wargaming novella: Rubicon Fatale!

because things were quiet today, I took the liberty to do some chores/take care of important stuff but I also remembered that still have a couple AW Chieftain Mk. 6 codes laying around. Last month I sent a gift to all on Patreon and noticed that more of you became Patrons the days after, first, thank you very much for all the support, second, those who are new please check you Patreon Inbox, you have a code waiting as appreciation as well. <3

Also, its been awhile since I've done this, a lot has changed in my life since my last Contributors post, mostly after new years, I currently have plans to build a second page for non tanks/games related stuff (miscellaneous geekery like model building/drawings, books, series, badass lazy gamer food recipes and all that jazz) that you been asking for me to share on my free time but have no really appropriate place for, Sammy Hallam who's a very talented artist and been doing artwork on my pages for over a year already has some plans on how it should look like, trusting the men. Do contact him if you need artwork made, bring a coin of course. ;)

Also a big thanks to all the readers!

Wargaming EU is back with another feedback data gathering (this is an official one), it will be available until 18 of February and they want the following:


Because there is no need for translations you can just hop into this link and give your feedback (and make them hate me for giving them more work :P ): http://forum.worldoftanks.eu/index.php?/topic/553961-feedback-poll-closes-on-1802/page__p__12111643 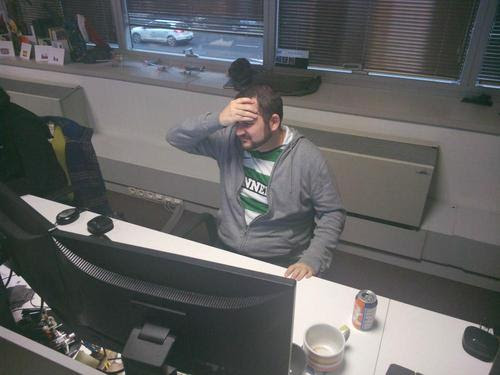