Will be streaming for the next couple hours Armored Warfare, will be testing Early Access phase 4 together with SilentStalker: http://www.twitch.tv/ritagamer2

As promised, I unlocked  many tanks in advance and will be playing with as much of them as possible!

- Unfortunately the WG devs didn't manage to make a free camera in the anniversary hangar;
- There were times when Storm was fed up with WoT but he always returned back, he feels personally connected to it;
- Cromwell B is doing fine as a premium vehicle;
- Storm confirms that producer Slava Makarov was forgotten on the "hall of fame" picture in WoT garage;
- Storm states that whether it is a real issue when one team has better players than the other (no skill MM) is debatable;
- One of Storm's ideas to make heavies more resistant to fire was to allow heavy tank spall liner to reduce damage from APCR and HEAT shells;
- Q: "Do something about the L56 penetration!" A: "Okay, I'll nerf it :)";
- Motion physics was not forgotten, vehicles are being reworked now to fit the new parameters;
- FV4202 switch was delayed due to some error in modelling.

finally I'm able to post the July Contributors, with the new patch information coming there was no space for it.
Anyways, RSR has reached 5 months of existence!

Visited SilentStalker in Czech Republic and we made the best of our time. Got to visit The Military Technical Museum Lešany, walked around Prague, ate some Trdelník and had a degustation of Czech beer (Kozel is my favorite).
I had a different expectation from Czech Republic, mostly because most Czechs Ive meet don't usually talk very positively of their country but damn! Its a beautiful place! The capital is not messy, it may be old but its clean and well kept and the country side is gorgeous as well!
10/10 want to visit again (because I've already ran out of Slivovice)!  :P

Later on, spent some more time around The Tank Museum, got authorized by one of the Curators to take measurements of some vehicles and got shown around their Workshop and Hangars. I was so thrilled to be there again, specially to see the tanks they run in the arena (wasn't able to see them during Tankfest as it took me 40min to cross 20meters while greeting and taking photos with you and spent the time making sure Jingles would also get hydrated and fed as he got it much worse than me, still... was wonderful meeting each one of you!). Also did a break for some refreshments at their restaurant and by refreshments I mean that was thirsty for some Landship beer! Its The Tank Museum very own beer and is damn delicious, if you visit them make sure to try some! Got to have a relaxed talk with one of their lads about propositions and ideas, so excited for the future! :)


If you want to know more about its history and how it got applied in game hop into this link: http://aw.my.com/us/news/general/introducing-centauro-120 there is a new KTTS/ASAP video:

yesterday an issue of Jimquisition (popular Youtube show about games) came out where Jim Sterling (the host) bashes Konami for not giving due credits to people behind their projects (such as the famous Silent Hill series). He mentions this as one of the worst sins of Konami - what serious company would do that? 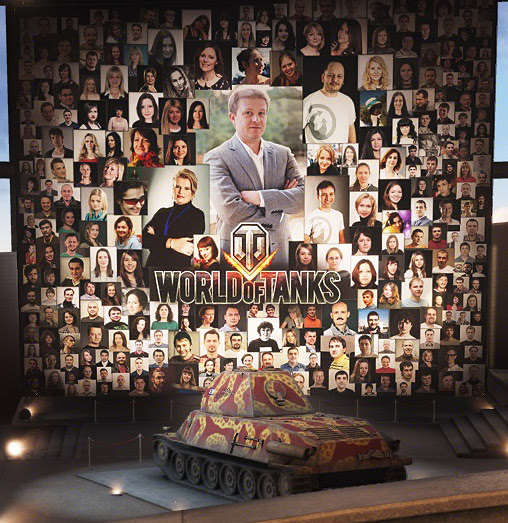 This is the picture posted yesterday by Yuri Pasholok on his blog - it shows the "Hall of Fame" of Wargaming. Some people on the picture are clearly superfluous (such as the lady, left from Viktor Kisly, some financial head honcho or something) but some very, very important people are missing. This man is Pyotr Bityukov, one of the "old guard" and the man who practically invented World of Tanks. He was one of the original people who (with SerB and Storm) created the WoT concept in his appartment. Currently he is working at WG in vehicle production, assembling references for vehicles and is one of the key figures in the decision what tanks get implemented.


And now the second developer:

This is Slava Makarov, also one of the original World of Tanks people. Ignore the ponies. He is a high level producer currently active in.... well, now that's still a secret. Slava Makarov is well-known to the Russian community (not only for his love of ponies it seems but also for - especially earlier - constant and solid communication with the playerbase, sprinkled with trolling).

So, why aren't Pyotr and Slava in there?
Posted by Unknown at 11:16 No comments: