- it's possible that in 0.9.8 test, HD IS-3 BL-9 gun is too short, Storm will investigate
- Storm statest that weird ricochets like this are fine and intentional: in order to optimize game data transfer, the ricochet graphics effect will display the shell flying off to random direction. It's an "optimization in order not to waste data transfer on useless data"
- it's too early to disclose any details on the upcoming penetration nerf, developers are still experimenting
- Storm blames the violent community reaction on the supertest penetration leaks on Youtubers: "because they did spread it everywhere"
- Storm considers supertest "very useful"
- VK4502A MG weakspot on front hull will be fixed when the vehicle appears in HD
- WG is researching the ghost shell issue in 0.9.7 - "we already dissected all the replays to molecules"
- changes to hangar (tank selection carousel) are still planned ("in development queue")
Posted by Unknown at 16:56 No comments:

in recent weeks, multiple posts on Czechoslovak tanks appeared on various forums (mostly Russian). Practically all however were using obsolete info with some really bad extrapolations. This post is intended to summarize what we (well, I) know about this upcoming branch/tree/whatever.

Was it officially confirmed?

Will it be a branch of an EU tree or a separate tree?

Czechoslovaks will receive their own insignia (flag) on the vehicles, their own separate crew names and their own consumables. For all intents and purposes, it's a separate tree.

How will it look?

Like this (minus the premiums apart from the T 40): 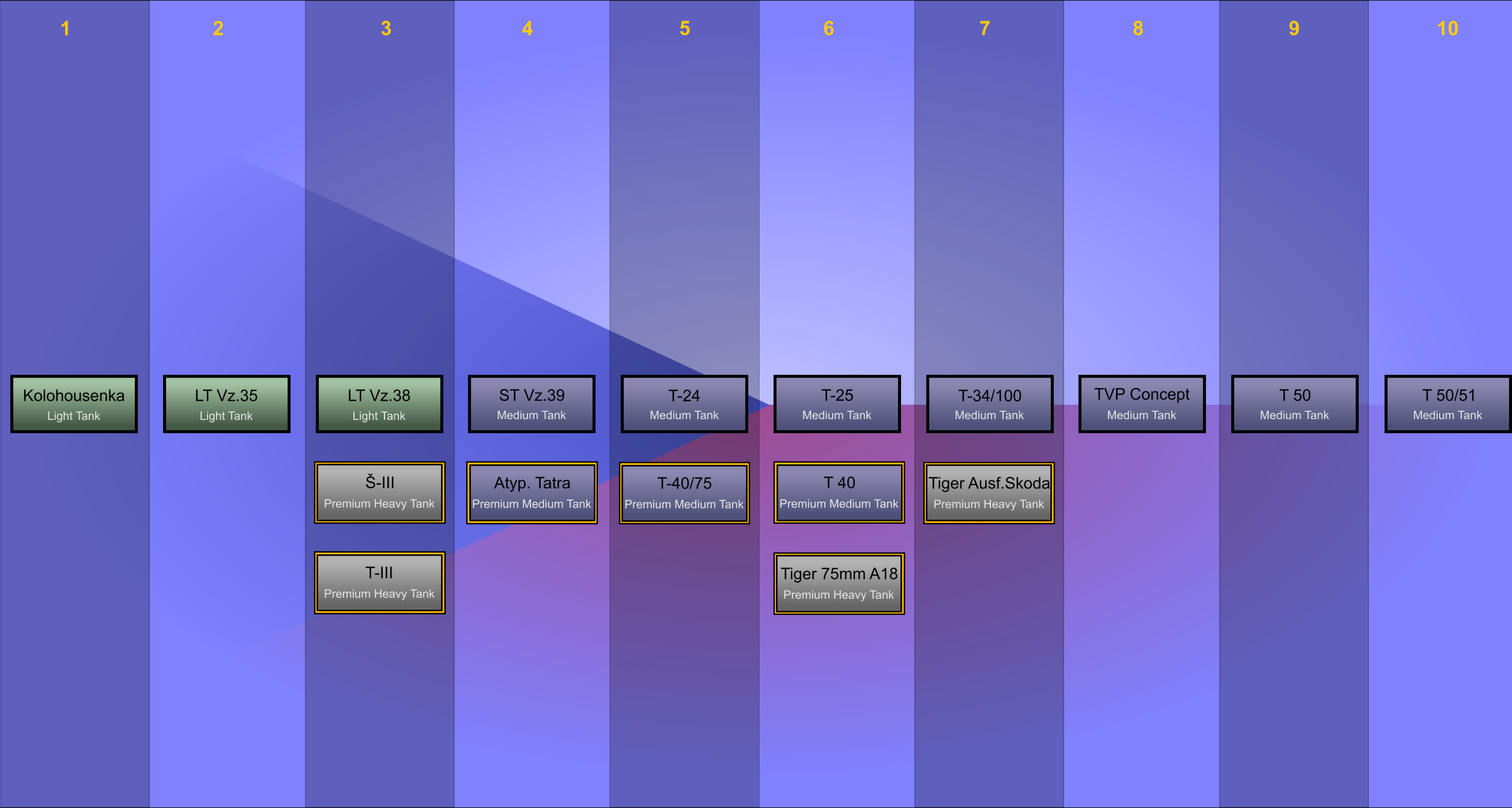 When will it come?

End of the year with the premium tank coming two patches ahead (at the end of summer). Of the three branches Storm announced for this year, this will be the third.

I don't know about you but I find this very impressive :)

every Friday, Wargaming FM (Russian WG web radio) runs the Developer Hour Q&A with some WG staffmembers. This time it was with "Kirill" and "Yaroslav", game mastering specialists. The topic was "chat toxicity".

- in one day on RU server, players write 15-20 million battle chat messages
- there will be a special chat ban category - bans for specific chat channels only ("when it's done it's done")
- currently chat ban is tied to a player and applies to all channels at once
- the chat ban punishments will become more strict and there will be an automatic system that will punish recidivists with longer and longer bans
- anti-record: one player on RU server in 16 battles in a row (all in one day) said over 2000 swear words
- the idea that players will be notified that someone was banned based on your report is good but difficult to implement technically
- the chat system is limited technically to 1000 names in your friendlist and ignore list
- if you swear a lot (like REALLY a lot), WG can chatban you permanently
- complaint review department works 24/7
- players are encouraged to actively use the complaint system, WG will work on it and improve many of its functions including adding some "system of rewards"
- WG recently started a new initiative to reduce swearing in chat with tougher punishments for trolls and vulgar players. In last two weeks, based on this event, the amount of swearing was reduced to one half