- Storm admits that the post-battle results window in 0.9.8 is "unfinished" and will be fixed;
- Storm states that the best place to hit HD IS-3 is lower front plate (the turret roof weakspot is still there but it got much smaller);
- AMX 50 120 depression/elevation was not nerfed in HD;
- Storm confirms that the woman crew 0 perk mechanism was fixed, the first perk after the 0 ("BIA") perk now takes as much XP to level up as if it was the first perk;
- One player was stupid enough to post his problem with clan interface using his own clan that is called after Waffen SS unit - Storm was not amused (ban + clan disbanding) (RG: Very good call on that!)
- Regarding fighting banned mods, Storm states that making the client check the mods running against a list of banned mods would be pointless, that kind of protection would be broken within days;
- Same goes for only allowing "authorized" mods, it would get broken;
- Storm confirms that when downloading a SD client, you are still using the same textures as you used unless your texture quality was set on maximum. In other words, anyone who is not using maximum setting should select SD client in order to save space and download capacity;
- Storm confirms that the Domination mode will be like an event (football, races, Karl) and a temporary one, it was indeed delayed because of mods not working in it (XVM), Evilly confirms this info as well, mods are now affecting WG schedules.
- HD Type 59 and HD T-62A will have roughly the same armor as they do now;
- Developers are working on finding the cause of "twitching arty aim circle" bug in 9.8, so far without results. The current version is that it's simply bad connection of affected players and not a bug;
- Evilly confirms that personal reserves will be added a bit later.


And the daily (missed doing this :P ), Tanks from Norway, Ikzor shall be proud! M48A2 is one of the American M48 medium tank series. This vehicle was a prototype. It existed in several variants different from each other by their turrets and guns. This tank represents the M48A2 hull armed with a 120mm T123E6 gun in the T54E2 turret. It was never mass produced.

Alexei Inaki Ilyin confirmed that there would be either a tier 8 Mammut with 128mm gun or a tier 9 with 150mm.

Which one you think would be the best (according to the tiers)?

Little voice in my mind was telling to take a look at youtube, and yep, was missing this... Check out the Early access trailer from Armored Warfare, just love it:

according to Aleksei "Inaki" Ilyin, a vehicle that will appear today on supertest will be the M48A2/T54E2 hybrid (hull and turret), a tier 10 event tank with 120mm gun. The hull will be about as good as the one of current tier 10 (identical), the gun will be a classic 120mm American gun. Mobility wise this vehicle will be similar to other American high tier mediums. This one left us laughing here...

One of you, Bernardo "PzBarkhorn" Bringhenti, was  enjoying his time while reading about various famous WWII tankers on the internet. As usual, Google gave him a listing with associated names and he noticed something peculiar... there is a British spy in this list!

- Regarding the 9.8 bugs - player: "So WG has 'best QA' in business, huh?" A: "No need to write such garbage here";
- Storm was defending the name "Mammut" on the forums but according to Yuri Pasholok, the name "Mammut" is fake because it's not on any of the documents. It's not certain where its source (Michael Fröhlich and his book on Maus) took it from.
- According to Storm, more than 60 FPS doesn't make much sense because above 60 FPS the brain can't tell the difference anyway;
- Some players claimed that reworked Karelia has some stones transparent (can be shot through). Storm states that to fix this sou should put landscape quality at lest one degree higher than minimum;
- Various marathons ("get 150k XP, get a tank") are not decided by developers but by the publishing department;
- Q: "I wish that the person who decided to put guns above 150mm on tier 7 arty would suffer" A: "I strongly suggest you calm down and not post personal attacks. Only warning."
- Spotting system was not touched in 9.8;
- Q: "How will you deal with banned mod?" A: "Unfortunately there is no universal solution."
- "Domination" mode on 9.8 is delayed, according to Storm: "It's because of mods. XVM doesn't work with it because the UI got changed somewhat in it." (so mods are now causing content delays?)

Good new for the Super Pershing cry babies (like myself ;P )!

The Super Pershing with the garage is the SD version (from before 0.9.8), the other is HD. The armor displayed is without spaced armor. As you can see the previous one had a huge space behind the turret (green zone) while the new one has that space covered by armor (completely unhistorical) so the turret got in theory a massive buff. 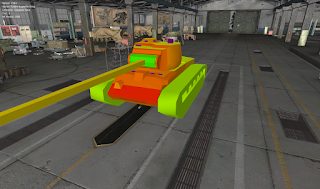 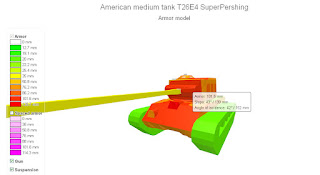 from supertest comes a picture of the Mammut (clearly an unfinished model) in battle. Not sure why but this is how it looks.