I'm a bit late tonight for streaming but better late than never, had to cover some important work for the blog (things for the next days).

Tonight I will be streaming World of Tanks and doing Tank Requests.

Oh... and because it was announced that Star Trek series are coming I decided to wear my Starfleet Uniform for tonight. :3

Engage!
Posted by Unknown at 22:21 No comments:

another silent video from 1944, this time with the Type 95 Ha-Gō which got introduced recently to WoT:


Little cutie testing if it can perform Skyrim horse physics. :P
Posted by Unknown at 20:07 No comments:

The armor "changes" being passed around are in fact just different vertice points/slopes on the frontal plates, took screenshots with the best angle/visibility and if you make these images bigger you can notice them. 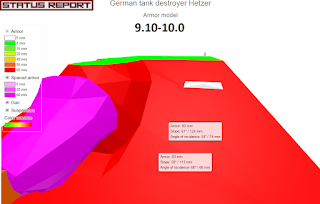 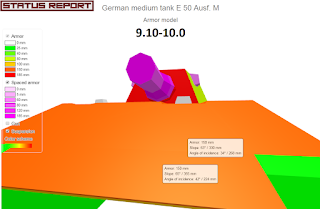 Although THERE is a change but not what they have been telling you, the E 50 Ausf. M has received these changes:

- Storm refuses to confirm that 10.0 will not come (this info however appears in multiple sources now, including major Russian bloggers) - he states: "Let me put it this way: the picture is much more complicated"
- Storm further on 10.0: "Sorry, I will not comment anymore simply to refrain from hints at me or the company. Then the streamer guys take everything, twist it and make "interesting" videos about it. I am not interested in that."
- Storm on his personal position about the 10.0 fail: "No need to pity me. Really. No matter what, I will do my best to improve the game. That is a possible goal."
- Is the situation in WG irritating to you? "It's been always like that since the project became big"
- In the recent round of testing, the Centurion Action X stabilization (accuracy on the move) did not improve
- Rubikon patch failed because there was a huge number of changes on both client and server side, preparing the ground for the future updates
- Xbox has now new tank physics, no ETA of the same for PC version available.
- Apparently 77 percent of WoT players are older than 25 years
- According to Wargaming advertising, all the tanks in the game are made according to historical documents

- Vickers MBT Mk.3 would fit the game according to Yuri Pasholok

This is the most recent Q&A from the AW Devs:


Currently, the players can already convert reputation to global reputation when the vehicle reaches the fully unlocked status (100 percent). There are no plans to change the reputation system but the Interface will be reworked to be more comprehensive
Battalion Alliance members will in the future have more options to customize their Alliance
There are plans to add sound warnings for various events in the game, such as the spotting indicator
Developers are considering the platoon voice chat feature but for now there are no concrete plans to implement it
Developers are aware of the issue where the penetration/non-penetration decals are not sometimes working correctly, it will be fixed
The option to report players after the battle ends is already in development and will be added in the future
Developers are considering the addition of an ultra-low detail mode for very slow computers with most effects removed. Earlier there was actually such a mode developed, but there were many issues with it (invisible obstacles, shell render issues etc.), so before such a mode is re-introduced, the developers have to make sure such a mode is playable
Developers are considering ultra-high setting mode as well for the best of PCs, but there are no concrete plans for that yet
Currently the "Hard" PvE difficulty is considered too easy with 80-90 percent winrate. There are plans to make it harder for tier 7-8 vehicles (while increasing the reward for successful completion) and then to add the "Insane" difficulty that will be even harder (but with even better rewards)
There is a bug in the game that makes a part of the crew and commander skills not activate in battles. This issue will be corrected in 0.11 along with some of the bugged commander and crew skills/perks.
In time the developers will add the option for the best player of the losing team to earn a special reward in PvP mode
Developers will add more mini-map functions, such as better indication of tanks who are (for example) requesting help
Vegetation on the "Narrows" map (as well as some others) will be reworked in 0.11 in order to increase the map performance
Developers are planning to introduce more achievements, including some very difficult ones with appropriately large rewards
Developers are planning to overhaul the Retrofit system so that the players won't have to play vehicles or classes they don't want to play just to unlock the Retrofit they desire. In the future, there will be multiple ways of obtaining Retrofits (from multiple vehicles and from a "production" system that is not yet implemented). Another variant that is for example considered is to allow the players to select any Retrofit module they want and unlock its Mk.3 variant when the "top" vehicle of the branch the player is using is unlocked (so the player can play whichever branch he or she wants without having to take available Retrofits into account)
There are plans for the future to allow the commanders of maximum level to unlock new options
Developers are considering the option to sell the Base resources for gold, but this was not decided yet
Regarding the common series of quick 15:0 losses and victories - the developers are carefully studying the statistics. In the near future, there will be a global Matchmaker mechanism overhaul and further research into this will follow after the result analysis of this change
There are plans to introduce the heavy T-15 IFV (Armata chassis)
The third Dealer will come in one of the upcoming updates. It will feature Asian and East/North European vehicles
There are plans to introduce a "special" Dealer for rare and "modified" vehicles and for vehicles that do not fit into any other branch, which will for example include the K1/K1A1/K2 Korean tanks. Conditions for unlocking of such vehicles are still in development
In 0.11, Swingfire will get a buff (reduction of the camouflage penalty for shooting), Challenger 1 will be buffed as well (firepower)
The first stage of the customization mechanism will be the introduction of two-step camouflage, where the player can select the pattern and its colors independently
Statistically, the worst tanks currently are the T-72A (poor armor), Starship (generally not very effective), Challenger 1 (poor firepower), Leopard 1A5 (underpowered in general), these vehicles will be buffed
Statistically, the best tank was the pre-nerf XM1 that was clearly overpowered (even post-nerf it has more than 50 percent winrate) and the M1 and M1A1 Abrams tanks that will receive a slight nerf in 0.11
Developers are planning to review the question whether to introduce tier 9 and 10 artillery a bit later and will take both statistics and the player opinion into account. Currently there is no clear answer available
Regarding the long Artillery queues, the developers are planning to remove the Commander and Retrofit requirements from artillery vehicles so only players who truly want to play artillery can play it and to improve the Matchmaker mechanism. These two changes should reduce the artillery queues considerably
Posted by Unknown at 16:55 No comments: 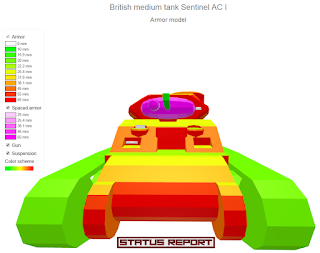