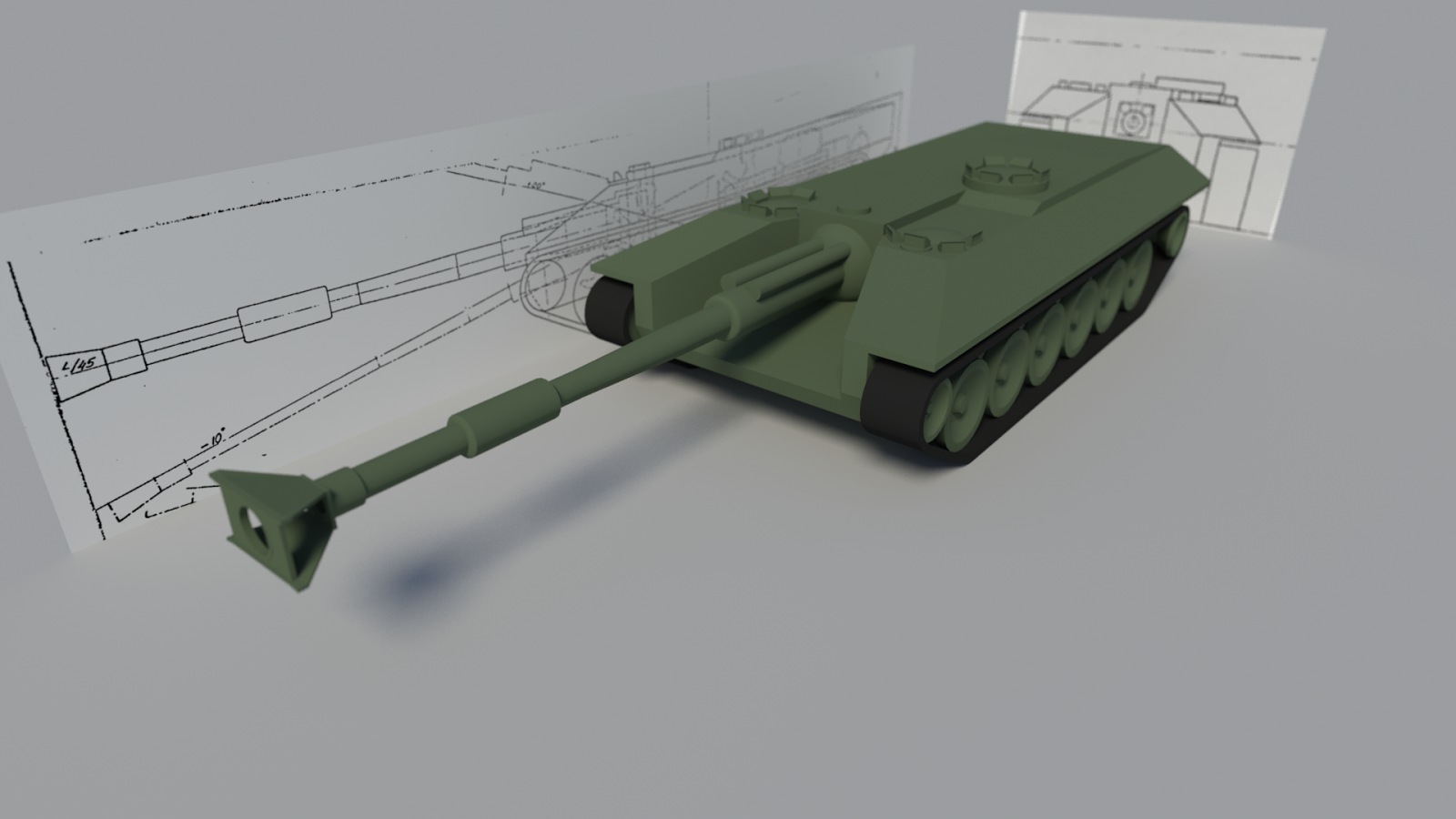 Welcome, back last time we started looking at the proposals made for of the UDES project during the early 1970s, this time we will proceed with the UDES 14 proposals from Bofors.

In the early 1973s Bofors along with Hägglunds & Söner received a request from FMV (the Swedish defense materiel administration) to start work on a new light turreted tank. This type of vehicle had already been studied internally by FMV and preliminary requirements had been drawn up with the intention of serving as a basis for further projection by Bofors and Hägglunds. In general the requirements called for a cheap low profile turreted tank armed with a 10,5cm L45 or L50 gun. The weight was to be in the 20 ton class and the vehicle would make use of existing parts as much as possible. The vehicle was also to have at least 10dg of gun depression and preferably be equipped with an autoloader. The project was to be divided into two phases where in the first both companies would come with several proposals that would be narrowed down to one or two which would be built as wooden mock-ups in the 2nd phase.


Bofors started their work on several preliminary designs based on concept vehicles drawn up by FMV. Later these were reworked, likely as a response to Hägglunds designs which achieved a lower profile by the use of hydraulic suspension to boost gun depression.

As the designs were being reworked, during a meeting with FMV it was suggested that a version with limited traverse should be drawn up to see what advantages such a vehicle might have. This was changed rather quickly after the meeting but still resulted in bofors drawing up two non-turreted proposals and one with a limited traverse turret. With these in addition to the reworked designs a total of 9 proposals not including a turret variation on one vehicle was submitted as part of the first phase of the UDES 14 project.

Statistics for those proposals 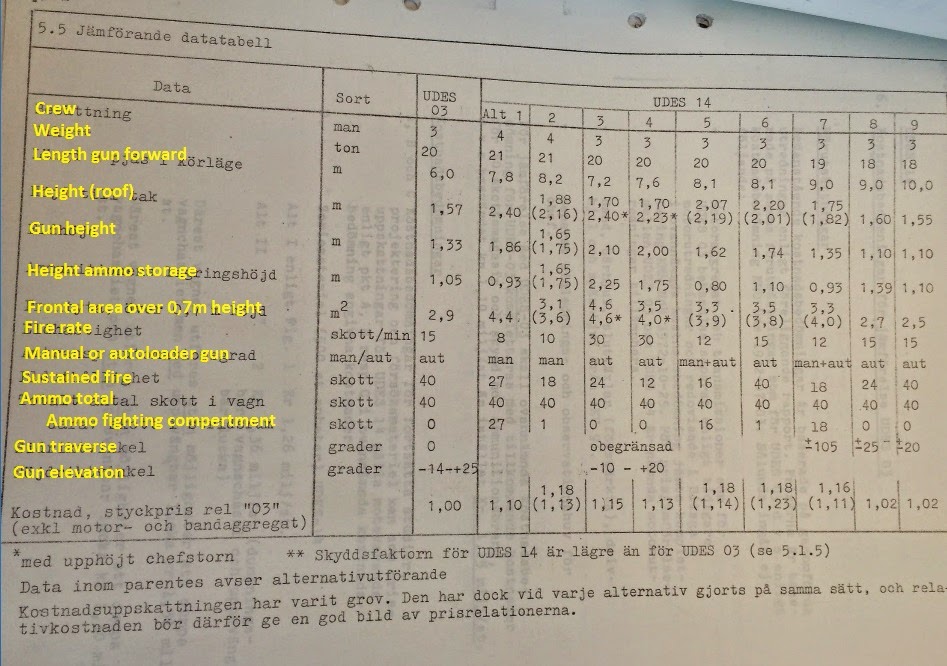 Out of these number 1 and 6a & 6b were conventional turreted tanks, number 3 & 4 were un-manned turret designs, numbers 7 through 9 were casemate or limited traverse turreted designs and number 2 & 5 was turreted designs with hydraulic suspension. Some of these designs were exceptionally low like number 9 which was only 155cm tall (that makes it lower than a ELC AMX!) while still mounting a 10,5cm L45 autoloader gun. In the end however only the turreted designs were deemed interesting and out of those number 2 was considered the best, mainly because it was lower than the other turreted alternatives and had an autoloader gun.

Sometime around the end of 1973 FMV selected the two designs they liked the most from Bofors & Hägglunds for further projection as part of phase 2 of the project. Their chosen designs, UDES 14-2 from Bofors and UDES 14E from Hägglunds were then re designated UDES 15 and UDES 16. From this point on we don't have any more documentation ourselves on the project, but we know that sometime after 1973 the UDES 15 and UDES 16 were combined to form the UDES 15/16. 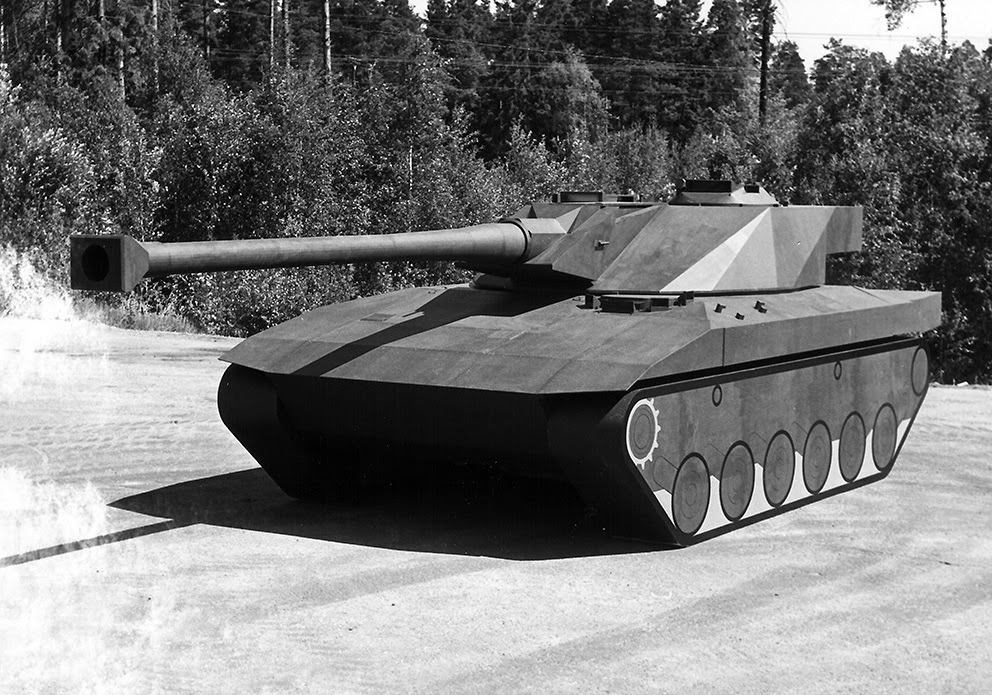 We don't actually know that much about the UDES 15/16 since we have not had a look at the original documents yet, but we do know it was a turreted MBT in the 25-30 ton range that was equipped with a 10,5cm autoloader gun, which would be able to depress to -10dg through the use of a hydraulic suspension system. This would remain ultimate development of conventional turreted tanks in Sweden for the duration of the UDES research group. As the 70s were coming to an end the Swedish economy which had been at an all-time high suddenly shifted as heavy industry was facing increased competition from companies outsourcing work to developing countries and a sudden rise in oil prices. As a result major cut backs were made and the UDES group was re-organized as the acquisition of the next Swedish tank was pushed to the future.

In World of Tanks
As with the vehicles in the last part its sort of hard to say if we will actually see any of these tanks in the game or not. None of them have any tech that would be too advanced for WoT but they are all past the WoT timeline which ends in 1970 with very few exceptions like the type 64 light tank. In any case vehicles like the UDES 14-9 could be invaluable for the upcoming Swedish tree as top tier tanks or even reward tanks.

Special thanks to MadestCat for the 3D model of the UDES 14-9.