The O-I (オイ車 Oi-sensha) was a super-heavy tank prototype designed by the Imperial Japanese Army during the Second Sino-Japanese War after the Battles of Nomonhan in 1939. The O-I is one of the Second World War’s more secretive tank projects, with documentation regarding the tank being kept private for over 75 years at Wakajishi Shrine, Fujinomiya. Surviving files have been purchased by FineMolds Inc., and publicly previewed in mid-2015. The multi-turreted 150-ton tank was designed for use on the Manchurian plains as a supportive pillbox for the Imperial Japanese against the Soviet Union. The project was disbanded four years after the initial development began, deemed unsatisfactory for continuation in 1943 after the lack of resource material for the prototype. 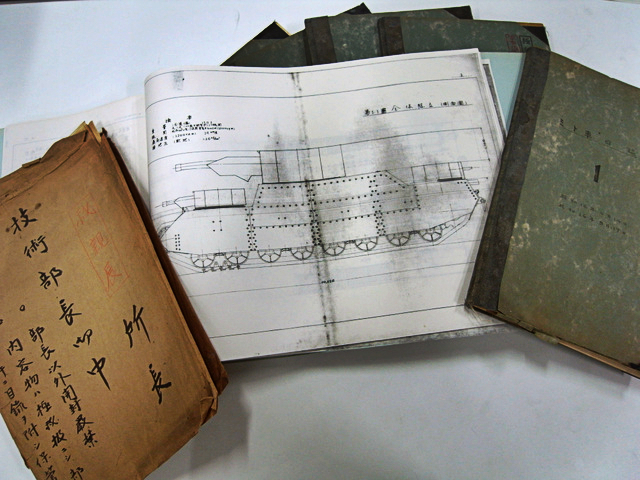 After 1939, the Imperial Japanese Army quickly came to realize that previous forms of mechanized warfare were proved inefficient after their defeat at Khalkhin Gol.

Development of the super-heavy project was spearheaded by Colonel Hideo Iwakuro, the head of the Ministry of War of Japan (陸軍省 Rikugun-shō). Iwakuro opposed Japan’s advances towards the Soviet Union in 1939, and with the Japanese defeat, he decided to initiate a project to construct a heavily armored tank capable of withstanding large-calibre field cannons. Iwakuro assigned Colonel Murata of the 4th Technical Research Group to design and construct the super heavy tank in 1939. Colonel Murata noted Iwakuro’s words as described;


「満州の大平原で移動トーチカとして使えるような巨大戦車を作ってほしい。極秘でだ。」
“I want a huge tank built which can be used as a mobile pillbox in the wide open plains of Manchuria. Top secret.”


「今の戦車の寸法を2倍に延ばして作れ。」
“Make the dimensions twice that of today’s tanks.”


The 4th Technical Research Group began designing the super-heavy vehicle throughout 1940, attempting to meet Colonel Iwakuro’s vague instructions on the ultimate goal of the project. By March 1941, the research group had finished initial tank design and was ready to begin construction. The following month, a group of pre-selected engineers were chosen to partake in the building of the super-heavy tank. One recorded engineer was Shigeo Otaka, who stated they were sent to the 4th Technical Research Group’s previous headquarters in Tokyo. There, they were guided through a barracks containing multiple small fitting rooms, where they were to conduct meetings and reports on the progress of construction of the super-heavy vehicle. Towards the end of the barracks facility was a fully-enclosed room devoid of windows, with soundproofed walls to prevent external personnel from overhearing discussions related to the project. Each officer present possessed a portion of the project’s blueprint, which, when assembled, projected the full design of the tank, labelled "Mi-To". The name originated from a collection of the Mitsubishi industry and the city, Tokyo; given to the vehicle to uphold secrecy of the tank’s project. 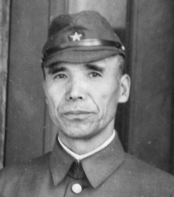 
The chosen engineers voiced their concerns regarding the Mi-To’s design noting that previously, the largest-sized Japanese tank had been the prototype Type95 Heavy in 1934. Issues that had been noted with heavy tank experiments in the years preceding the Mi-To showing Japan’s generally unsuccessful testing on multi-turreted vehicles exceeding the weight of standard armored vehicles. However, with the threat of a second Russo-Japanese conflict becoming more apparent, the project continued despite the engineer’s doubts on the size and mobility of the vehicle.

On April 14th 1941, the engineers began the construction of the Mi-To under secretive means. This entailed privately-made mechanical parts and equipment being shipped to the construction zone. Colonel Murata’s original concept was to complete the super-heavy tank three months after the initiation of Mi-To’s construction. This, ultimately, did not come into fruition; as technical issues on the project began to arise. Due to the limitation on material consumption by the government, the amount of parts that could be secretly shipped-in began to dwindle. By the first month of construction, essential construction resources had been depleted and the issues with the vehicle’s cooling system further caused delays. The construction of the Mi-To was postponed until January 1942, a delay of nine months.


After the Mi-To’s construction was resumed, the hull was completed on February 8th 1942. The tank had reached near-completion and was being prepared for mobility testing. Mitsubishi built the four turrets for the tank in May of the same year. Initial assembly of the tank’s armament took place soon after the turret’s superstructures were completed. However; the project once again did not have the necessary resources needed for the few remaining parts required for the final assessment. Due to this, the primary turret was removed as it lacked a 35-millimetre-thick roof plate, which had not yet arrived. Thus, the project was put on standby, until further development could continue. The total weight of the vehicle at the time was 96 tons, due to the lack of remaining structural plates and absent 75mm bolted-on armor.


The date on which the construction of the tank resumed is unknown, although active testing of the tank was scheduled for late 1943. The tank was unveiled to the Imperial Japanese Army’s highest command in 1943, and received a name change to O-I. This followed Japanese naming convention (O translating to Heavy, I for First, making it "First Heavy") that was standard. In his place was Lieutenant Colonel Nakano, Murata's assistant and colleague. Tomio Hara, head of the Sagamia Army Arsenal, was also present. Following the demonstration, senior officials within the IJA requested that field trials begin in August of the same year. The tank was disassembled at 2:00 AM one night in June of 1943 and sent to the Sagami Army Arsenal in Sagamihara, 51 kilometres from Tokyo. The vehicle arrived at the depot in June, and was reassembled and tested on the 1st of August.

On the day of the trials, the O-I performed satisfactorily until the second hour of the tests. While manoeuvring on off-road terrain, the tank sank into the ground by up to a meter; attempts at traversing the hull to extricate the vehicle proved fruitless, resulting in further sinking due to the vehicle’s suspension coils compressing. The tank was eventually towed out, and further testing was continued on concrete. However, the earlier damage to the suspension resulted in vehicle’s movement damaging the concrete, which in turn, further damaged the suspension bogies to the point that further testing could not continue. The trials were postponed, and later cancelled the following day.


Nevertheless, the trials conducted at the testing field were considered to be a success, and the vehicle was deemed ready for use in spite of its flaws. The engineers began disassembly of the tank on the 3rd of August due to resources being limited and the inability to maintain the tank in the field. Disassembly of the tank was completed on August 8th. Two days later, the engineers noted in a log that they were to inspect the parts and conduct research to fix the issues the O-I would face.


The fate of the O-I after its field-trials which took place on the 1st of August is unclear. Russian reports claim the Japanese were in possession of a wooden O-I mock-up mounting a Daimler-Benz DB 601A engine in 1945, however other sources point to the scrapping of the remaining parts of the same year. The remains of the O-I reside at the Wakajishi Shrine, with a track link of the prototype still present.

The O-I was conceived out of the necessity to produce an armored vehicle capable of withstanding modern weaponry being able to return fire with similar firepower. The O-I was designed to act as a mobile pillbox, supporting infantry and mechanized groups along the border  of the Soviet Union. The tank had a length of 10.1 meters, width of 4.8 meters, and a height of 3.6 meters. The dimensions of the vehicle closely matched those of the Panzer VIII Maus. The tank was envisioned to have a standard thickness of 150 millimeters front and rear, in order to protect against common anti-tank weapons of the time, yet it was constructed with armor 75 millimeters thick. However, an additional armor plate could be bolted on to bring the total thickness of the armor to 150 millimeters. The use of additional armor allowed for ease of construction and transportation, while also providing the tank with additional defense. Side armor on the hull superstructure was 70 millimeters thick. The additional armor plates were 35 millimeters thick,  but armor surrounding the suspension was only 35 millimeters thick. This made the tank’s theoretical armor on the side 75 millimeters.  There were eight wheel-supporting beams located on both sides of the suspension area which added an additional 40 millimeters of armor to specific locations on the side of the O-I. 40 ladder pieces were placed around the tank to provide crew with the ability to climb onto of the vehicle with ease.


The two 47mm cannons used in the two frontal turrets were also modified to fit the armor layout of the tank. The weapon’s barrels were reinforced with steel to secure them to the tank, due to the standard gun not adequately fitting into the turret.

The tank was both designed and built with two inner armor plates to divide the interior into three sections; walls with two doors each and an ultimate thickness of 20mm. This allowed the crew and modules to remain relatively safe while the structure was kept safe with supporting stands. These supports allowed the interior armor plates to stay stable and also prevented collapse. Inside the O-I were two Kawasaki V-12 engines, both located in the rear, parallel lengthwise, to give room for the rear turret operator and transmission. The transmission copied that of the Type97 Chi-Ha’s, but used larger parts and gears making the total weight heavier. The vehicle had a coil spring system, with eight 2 wheeled boggies, totalling 16 individual wheels. 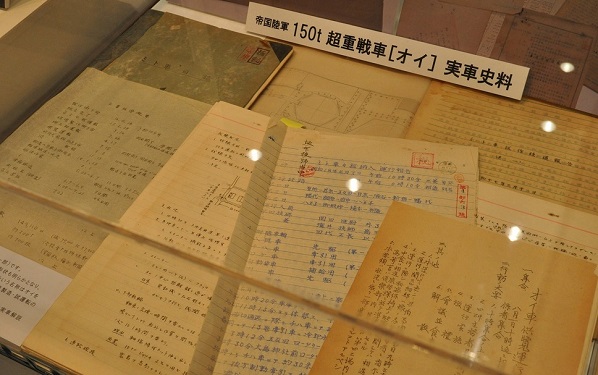