tonight Ph3lan (Community Coordinator EU/EN), Piotr (Community Product Specialist EU) and I gathered in our free time to live stream a Q&A about the 9.12 patch for you.

For a first time it went okay and after invitation, WG EU has agreed to do this type of Q&A for the next patches as they trying to be more transparent (I will see if I can get them to make a more general Q&A and they already said that will be giving you as much information as possible in the future too).

I manually picked questions from you (comment section and forum) and tried as much to stay in the 9.12 patch subject. 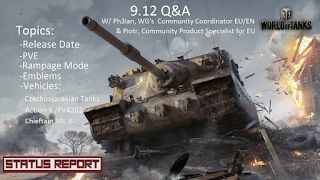 And here you have it, Video and Text for which way you prefer, or how I enjoy to say, "Whatever floats your goat":

"The patch is being tested so as soon as its ready it will be released but first we want to be absolutely sure it works and everything is as it should be so we don't really have a exact date, unfortunately." "Once the Devs are satisfied that the version works it will hit the live servers"

- When will the PvE mode come?
"In 9.12 only the tutorial will come." Currently the PVE mode is a intermediate step that new players can take between the first tutorial and normal battles and not like the PVE mode of Armored Warfare (including all tiers usage), although it may change in the future."

- Why WG decided to remove the gas cloud in the new mode?
"First of all it caused problems with FPS with a lot of people so it had some performance issues and so for now it has been taken out of the patch and it might come back later on, we dont know that yet."
"We also gathered a lot of feedback about it so that might also play a role on what will happen to it later on"

- Will the missions for the T 22 SR change?
"They are on the public test right now and we are gathering feedback about it plus statistics and if there is something that indicates that they should be changed then they are going to be changed before it goes live but other than that they shouldn't be changed too much."

- Is it a coincidence that 9.12 announcement came just as the emblem discount ended?
"Yes, its definitely a coincidence. Basically that was planned way before the emblem problem arouse because all these discounts, every special its planned beforehand" Basically what we did, we planned something for Halloween (...) so our tanks dressed up for Halloween with camouflage and emblems and that coincided with the removal of the emblems"

- Will any compensation be given for emblems already purchased with gold?
"The emblem bonus system for now is removed from the update so what's going to happen to it is based on the players feedback plus the statistics we gather so this may not be a problem when the emblems come back, if they come back"

On the subject that Wargaming currently doesn't not have a refund system for Exterior consumables: http://ritastatusreport.blogspot.co.uk/2015/10/wots-incriptions-not-refundable.html

- Will the prices of the Emblems become cheaper and more accessible?
"This is the part of the reword that the whole system is going throught, the team is looking into possible solutions for this problem and we also got a lot of great ideas from the community on how the system could look like so thank you very much for that and all those ideas and feedback have been relied to the developers which are now looking into all the possibilities. Maybe the prices will change or be adjusted, maybe the system will also change, is too soon to say anything."

-What are you doing about the AMX 13 57GF, a tank that does not allow players to change cammo or emblems? Will you be removing the cammo/WGL emblem?
No, basicly the tank already has the cammo bonus by default and the tank only allows one emblem (the WGL logo) but it may change.

-Which are the new vehicles introduced in 9.12?
"Skoda T 40, Centurion Action X and M4A1 Revalorisé"

-Czechoslovakian vehicles, will we see more than the Skoda T 40?

-Does the delay of 9.12 patch mean that the Czechoslovakian tanks are not gonna make it into the game this year?
All CZ tanks that are supposed to come next patch will arrive, WG managed to keep their schedule and all their content will be coming as planned.

-In 9.12, will the SKODA T40 be added in-game shop?
"No, it will continue to be available in the Premium shop at least until end of November and then in future patches it may come to in-game shop but I cant promise anything right now."

-Silentstalker built the CZ tree, how do you feel about that?
After awkward chuckles and silence between us (no hard feelings): "I'm happy that the players contribute to our game and show dedication so we can make the game better together"

-Will the Mission be temporary or stay?
"The details for the mission are being finalized, the conditions and requirements of the mission are not final yet neither does its time frame so this is still up to be decided and it will most likely be available for a certain amount of time."
"You still have at least 2 months to get your Centurion Action X in your garage and in January we are planning to announce the mission and you need to have the tank in garage before it starts or even after"

RG:  "Would be nice if you gave us a nice boost you know, like "Top of the Tree... to get the tank faster!" *wink wink*
Ph3lan: "We are gathering the feedback right? *giggles*
Piotr: "Yep! Yep, notting down!"

-Will be the mission less time consuming and more doable than the previous missions that had tanks as rewards?
"The missions are still being worked on so we don't know yet but we are considering the players feedback"

-Why was the Chieftain dropped as the replacement for the FV215b?
"Unfortunately  we do not have much to tell about the Chieftain, its not coming in the 9.12 and its not coming this year neither. The devs decided to find a better application for this tank and they are trying to... I cant talk about this, I'm sorry, this things are still being discussed."

-Any information on how it will be implemented? Some players are afraid it will become a CW reward.

Piotr: "What's so bad about being a CW reward?"
RG: "What's bad about being a CW reward is that only very few percentage of the community will be able to get the tank and this is a tank pretty much everyone wants, that's why"
Piotr: "Ok, its an iconic tank that everybody would like to have in garage, I get it"
...Silence...
Ph3lan: "Basically we cant get ahead of ourselves, we cant definitely say that it wont be a reward tank because we don't know it yet as its still being discussed, anything could happen to it at this point, we will share as soon as we know more."

Extra info that Piotr and Ph3lan brought along and questions picked from the chat: