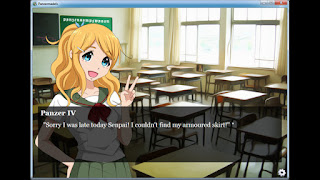 There is an "Anime tank girl dating simulator" on Steam Kickstarter, this is the description:

" Erwin Lemmor just got transferred to a prestigious military academy to study Armored Warfare. But when he arrives, Erwin realizes it's not Tank School, but "Tank School" for World War II Main Battle Tanks. Who happen to look just like Japanese School Girls...!
(...) Will he win the heart of the tank-girls, or end up as cannon fodder? Only you can decide in, "Panzermadels: Tank Dating Simulator".   "


The video is even better:


Already can imagine a KV-5 as an Russian cougar with fake uneven anime boobs...