there is a small update on the FV4202 Mission by MrConway: 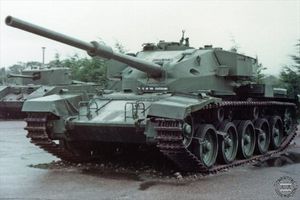 "Since we have been receiving lots of questions regarding the upcoming mission to obtain the rebalanced FV4202 tier VIII British premium medium tank, here is a short update!

To be eligible for the mission you will need to have the Centurion Action X purchased and in your garage!

The mission details and (if any) cutoff date for this condition will be announced round about the 19th of January.


To the grind gentlemen!"

He also says that unfortunately WG cannot promise that the missions will be published before the deadline, but it is likely.
Posted by Unknown at 18:45 No comments:

Screenshots:
Read more »
Posted by Unknown at 18:17 No comments:

Hope everyone had a most wonderful start of 2016 and I don't wish a good year, instead, I hope you make it so!
This one has been in the Borg alcove long enough and is ready for whatever 2016 brings, cant tell you much (all in good time) but what I've been working during 2015 will continue/start this year. Among events, tank lessons and other secret stuff to do in UK I already have planned to visit 5 other countries. I'm excited!


Also I'm committed to make serious emends this year, I feel very conflicted about 2015, it was the best year I've had so far on the professional level but on the personal one it was very rocky. I literally buried myself into work and tanks while neglecting people, it was easier that way. I've lost one of my maternal figures around this time not so long ago and it finally hit me hard the last words she told me, my grandparents are not getting any younger and my siblings are rushing into adulthood, I want to spend this year being more present to them.

Hopefully I may be able to get my driving license in time to take my grandfather, a war vet who is too old and been sick recently to drive to his annual platoon meeting. I always went with my grandparents since the first diner and had to stop when moved out from the country.


Besides plans to become more family oriented, I've already started being less nocturnal, eating healthier and jogging.
Haven't lost much muscle mass since my athlete days as always been good at maintaining condition but stamina has been quite bad, effects of have lived half a decade as a passive smoker (seriously people, if you have any sort of minimal care for people around you don't smoke near them, sincerely: someone who just nearly spat her lungs after jogging!)


But don't think I'm not dedicated to work...

Because I don't trust PC technicians and because I'm much a techie/home fixer I've resuscitated my laptop, the old chap is ready to be my mobile work station so unless I'm inside a tank, diving/fishing, jeep/quad mudding or being abducted by grandmas who will force a funnel in my mouth to pour food in while trying to brainwash on how I should find a man and give them grand-crying-pewp factories to babysit (NOT F*ing happening!)... I will be ready for blog duty. :)
Also, most of the travelling is to create content for you.


I just wish I could hug each one of you for your support but guess a thanks has to do it, you have no idea on how you changed me and my life for the better and for that, I'm eternally grateful.
Thanks to all Readers and Patrons.