things today were pretty quiet, I just wish I could have poked WG with a stick to do something funny.
I have some AW stuff to write about but it involves numbers and I need to merge some data that's being given by their community.

Anyway, its time for my scheduled livestream, as promised today I will be playing AW and will be giving away the Chieftain Mk.6 codes: http://www.twitch.tv/ritagamer2

Some were having the misconception that you need to subscribe to write on my chat but its not true, only thing you need to do is have an account on twitch.tv. Also this wont be the only time that I'm handing codes out, there will be more livestreams and I may try to find a way for blog giveaway, please feel free to add suggestions.

its finally 2016 and that means we are closer to the introduction Swedish tree than ever before. Its first branch has been confirmed as planned for this year and I'm rather worried about how the line will turn out to be honest, but hopefully it will turn out decent in the end. Anyway with the tech tree introduction rapidly approaching I've been thinking about some of the stranger branch ideas. And I thought that it would be neat to show off one of them here today.

Currently turreted TD's are quite a rare sight in WoT, most nations preferred the simplicity and higher protection of casemate TD designs. The few turreted tank destroyer lines currently in the game are mostly made up of vehicles with mediocre armor and mobility but with potent guns for their tier. There are a few vehicles that are more focused on mobility but the top tiers of these lines have both been big and rather slow vehicles.

The Swedish take on turreted TD's (from tier 6 and up at least) has been much more mobility focused, and closer to the American M18 hellcat than anything else. They are all lightly armored vehicles which have fully traversable turrets and usually excellent gun depression. And unlike the existing turreted TD's some are equipped with autoloaders. the reason I say this is one of the crazier branch ideas is that there are several problems with the line that for right now anyhow means its unlikely to get implemented. For instance the line uses several visually similar designs, and only has one or two vehicles that are relatively well known. Personally however I think there is still a lot of potential in the line since it would offer something unique in terms of gameplay. In any case I hope that you find the article a interesting read, or at least interesting to look at.

Its amazing the time and effort people put into these videos, it cracked me up a couple times. :D

there is some data out on the top 10 grossing console, PC and mobile games in the market, Wargaming is in the list: 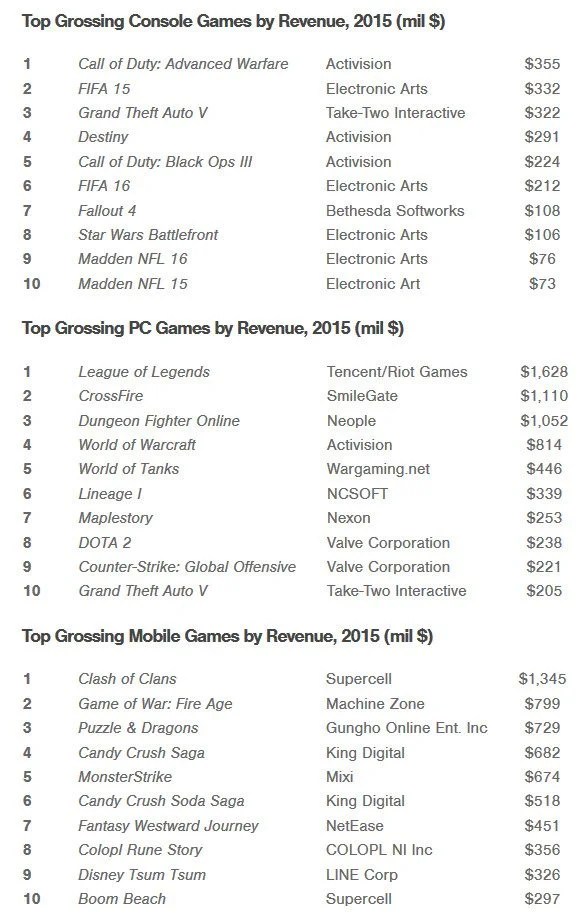 "In 2015 the worldwide digital games market totals $61B across platforms, up 8% year-over-year. Following a stellar holiday season for the games industry, total sales reached a record high in 2015. Sales of digital console games showed the biggest jump and were up 34%, despite being one of the smaller categories at $4B annually. The largest category in terms of dollar sales was mobile, earning $25.8 billion and up double digits (10%) from the year before. Sales figures points toward a shift in the industry as more consumers have adopted digitally distributed games and free-to-play. However, not all segments were posting positive numbers, as social games remained largely stable (-0.8%) and subscription-based gaming continue on its downward spiral (-4%)."


I was checking the data from 2013 and 2014, Wargaming always been in the green light, this year wasn't an exception although Wargaming has admitted that with the meltdown of the Russian market things weren't so easy, the Russian team had to come up with ways to reinvent the game to attract RU players back to the game as well as improve retention of existing players.
And note, this are just earnings from World of Tanks PC, it doesn't a account for their other products, in 2014 WG made in total 500 Million US Dollars and the prediction for 2015 was 590 M $.


Apart from that, on the console department, I was expecting Star Wars Battlefront III to make more revenue, I personally waited nearly 10 years for that game and ended up not buying it, is just too sad seeing Stormtroopers bunny hopping and I feel the game should have been called Counter-Strikes Back!
Also seems like middle age moms and the casual kids which vocabulary range can only complete the "Do you have games on you phone?" phrase are still keeping mobile games strong.

Slava and I want your feedback:

If you could play World of Tanks with just single tier tanks and all the battles would be within the same tier (you play only lvl 6 tank and you only fight same lvl tanks), which tier would you choose?

Thank you.
Posted by Unknown at 03:09 No comments:

Recently Wargaming has created a contract with Rostelecom...

The Company holds a leading position on the Russian broadband and pay TV markets, with over 11.4 million fixed-line broadband subscribers and more than 8.4 million pay TV customers, of which more than 3.1 million use the unique nationwide “Interactive TV” product."

Now, what this has to do with the T-44-100 (P)? Well Rostelecom has now a Tariff (package) for the Russian World of Tanks players (except for the Republic of Bashkortostan, Chechnya, the Crimea and Sevastopol, the Magadan region, Kamchatka Krai and Chukotka Autonomous District) and only those who subscribe to it will be able to earn the vehicle, its a exclusive with a brotherhood crew and 3 different camo patterns.


I was reading various Russian sources and according to WoTLeaks (when this couldn't be sadder) if people decide to change tariff the tank will be removed from their accounts. GG WP!


Now are we (EU/NA/SEA and you there in the corner, yes you KR, join us) going to get it? I will browse around for answers but very much doubt.
Posted by Unknown at 01:54 No comments: