Very recently a German guy decided to invade Netherlands by himself in his "tank".
The subtitles are not good at all but this is making me laugh so much, had to share with you.

Let me tell you a story about the FV4202 HD model. Storm confirmed that the reason the vehicle was delayed was because "permission approval in Bovington in order to model it takes too long" - the delay was/is long ("many months"). According to Yuri Pasholok, Wargaming's historian, there were some shady Richard Cutland's activities in Bovington recently, specifically Cutland slandering Yuri Pasholok in front of Richard Smith, the museum director, which was unprofessional. I wonder if there is a connection...

- Camo factor of a vehicle DOES change if you switch a turret (the camo factor is heavily influenced by height of the vehicle);
- WG is aware that the 0.9.7 version (new Bigworld) causes serious issues with crashes and black screen freezes, it will be fixed;
- Q: "Superpershing was nerfed in HD!" A (Storm): "Oh really...", later he adds that there is no need for players to send WG historical materials - the vehicle is not ready yet and it will be reworked (RG: Better have something done nicely and on is own time than try to rush things and make it even worse, lets be patient);
- Super Pershing rework (compared to earlier leaked HD model) will include correcting the upper frontal plate and lower frontal plate angles and making the additional plate over the mantlet bigger;
- It is not sure whether the M10/Panther hybrid removal from the ingame store in the 0.9.7 Test 2 is intentional and tied to the announced removal of limited MM vehicles from sales, Storm will find out the truth on Monday;
- Storm states he stays by his opinion that the quality assurance in Wargaming is one of the best in gaming industry.
Posted by Unknown at 17:04 43 comments:

some of you might have noticed - in the game, we get an occasional following system message spam:

"Attention Wargamers! Wargaming is looking to immediately hire a Content Specialist for its Paris office with a focus on translation from English to Czech. Follow the link for further information: http://bit.ly/1H3qWCE"

So, if you are Czech and want to work for Wargaming, feel free to apply. On the other hand - am I the only one bothered by an unrelated spam in the game? Same goes for unwanted WGL messages and stream "ads" (as a streamer I personally hate those), I wonder if we will see real advertising in the client ("buy this premium tank now!") before long.

two pieces of interesting news. Some of you noticed already: there is no M10/Panther in the ingame shop in the 0.9.7 test - you can't test that vehicle anymore. The thing is, many speculate (and some leakers confirm) that this is the initial stage of the removal of the premium MM vehicles from sale, as was announced some time ago by Storm.

Second piece of news concerns the supertest Japanese Tiger and the Type 59/Patton hybrid gameplay from supertest. Both vehicles have - as announced earlier - full matchmaking, this is intentional. According ton supertesters, the hybrid is very unattractive and boring, but the Tiger actually does really well against tier 6 and 7 vehicles, however - as expected - when meeting tier 8 tanks, its penetration is no longer enough, it's fun though.
Posted by Unknown at 13:29 23 comments: 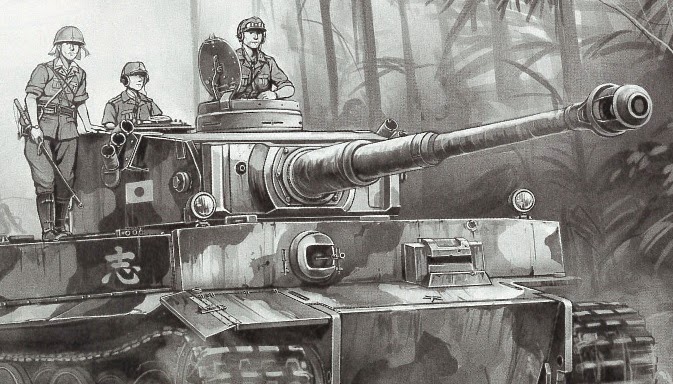 The following paragraph is a translation about the Japanese Tiger from a Japanese magazine. The magazine is: ミリタリー・クラシックス Military Classics, issue 21, published on June 1st, 2008. The above art picture is also from this magazine.

There is an interesting story that present day tank fans know well which is that during World War 2, the great Empire of Japan tried importing a Tiger tank from Germany. To a Japan Army that has schemed war against the Soviet Union in Manchuria, the Tiger being more powerful than any other Japanese tank, while expensive, was a very attractive vehicle. In July, Showa year 18 (1943), through the Pro-German Lieutenant General Hiroshi Oshima at the military attaché in the Japanese Embassy, Japan negotiated with Germany and formally decided on importing the Tiger. Importation cost was at twice the cost of delivery to the German army, at 640,000 marks. In order to domestically produce the Tiger in Japan, blue prints, ammunition, repair parts, and so on were arranged into the import plan. As for the tank itself, it was planned to disassemble it and transport it to Japan by German submarine. However plans never progressed further. Due to the worsening of the war situation, exporting the tiger to Japan become impossible.

Hello warriors, here are several new medals from the supertest client. Four are for team battles, one is for special April 1st "fun" mode - Destroy all enemy vehicles, you must not lose more than 1 vehicle of the lowest tier;
- Win in battle;
- Awarded to all the players of the winning team;
- The vehicle lost must not be higher than tier 7;
- Training victories do not count;
- Awarded only in team battle mode in ladder battles.