Its time for my scheduled livestream and energy based I'm really wrecked so tonight just going to do random battles and keep my grind going while I play my (mostly) 80's playlist.

another batch of Yuri Pasholok's Q&A:

- SU-152P is something like a Soviet Waffenträger and that's not just an analogy but the truth. In 1945, the Ardelt Waffenträger drawings were sent to Sverdlovsk with the task to design something like that. As a result an entire family of SPG's was designed. From the outside they look very different than the German ones but the concept is the same. - the country with the most tanks still lying in the archives undiscivered is probably Great Britain, but other countries still have stuff lying in archives as well
- Panzer IX and X are German fakes from "Signal" newspaper from March 1944
- there was a Panzer III SPG project with KwK 43 L/71 - the Nashorn (although its suspension has elements from Panzer IV as well)
- there was no such thing as IS-9 and IS-10 tanks (although IS-9 actually existed, it was the designation of the Russian tank starter module
- Conqueror Gun Carriage is a Wargaming fake, made analogically to the projects on Centurion chassis
- there was only one KV-5 project variant
- it's possible that T-29, T-29C and T-29CN Soviet medium tanks will appear in WoT

you know the Top Gun  medal you get for 6 kills? 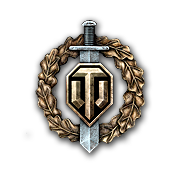 According to WoT.cz blog it turns out that the medal might have had some sinister inspiration, the blog discovered what appears as the picture of origin for the medal: 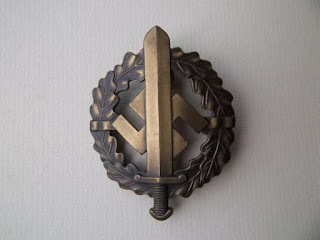 Coincidence? Intent? What do you think?


I personally would like an insight from WG on this and will meanwhile hide inside a drawer my Top Gun pin/broche. Its very common for medal to have the Oak Leafs but the sword...

*sigh...* it seems I cant trust my kids while I'm gone for a day. Came back to them poking each other eyes!

World of Tanks decided to make an petty attack towards Armored Warfare and it kinda backfired in the comment section of their Facebook Page...

Armored Warfare joined the comments with... 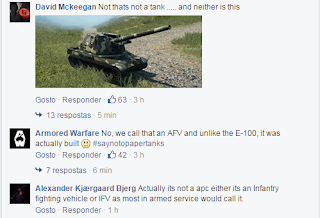 I'm aware that AW has fired previous shoots with the Chieftain and Type 59 but I never commented anything on it as I had more important things to write about and to be honest I try to keep myself as neutral as possible and I was expecting WoT who is the oldest brother to be more mature to ignore and let it die!

Armored Warfare and World of Tanks please fight each other but constructively and you are grounded for a week! No dessert after dinner and that trip to Disney Land I promised is cancelled! Back to your rooms!

What I've been up to yesterday...

I'm very broken at the moment but only because I was finally able to relax and have a full night sleep after a very work immersed week and as things were going to be quiet on Sunday, I took a much needed day off and went to meet a Queen:

Alice Krige is such a sweet and nice person besides being a amazing actress and she was the one that approached me to talk. With a lady like her as Borg Queen... Resistance is sure very futile.

I also meet the creator of Judge Dredd, John Wagner, Carl Weathers from Predator (he sang  "Lovely Rita" from Beatles to me and although I've heard it numerous times, from him it made me blush) and... oh my...*closes eyes and bites lips* René Auberjonois!

You can see it all on today's Mingles with Jingles: