a new episode of "The strangest fighting machines", this time they talk about Flying Tanks:

(Very "me Tarzan you Jane" English subtitles, would be nice if EU or NA would step up and maybe add voice over? Seems like a waste to only upload this type of videos for RU.)

another commercial from Wargaming, is a bit weird but because it happens in Japan its acceptable:

here are the statistics and screenshots of the new tier 8 Medium, M46 Patton KR: Description:
M46 is an American medium tank from the second half of the 1940s. It was also called General Patton in honour of George Patton, which was usually shortened to Patton. It was the first tank built in the USA after the end of WW2. The M46 was developed in 1948-1949 and was a modernized variant of the M26 wartime tank. M46 was different from the M26 by having a new engine and is considered to be the first of the "Pattons" - medium tanks and MBTs produced until the early 1980s.

The Premium Shop on the NA server received a revamp this is how it looks like:

The simple but sleek design matches the new WoT's launcher which by the way, when it got leaked the screenshots didn't made it justice, I actually like it more than the previous one.
It also seems like they fixed the badly translated tank descriptions. 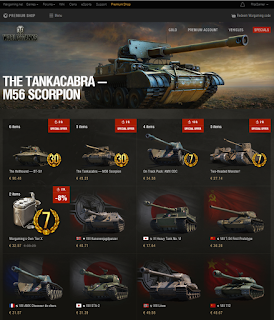 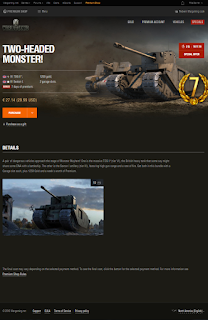 Since the 10.0 test server went live many Community Contributors like Quickybaby, Jingles and I have spoken against the current P2W state of the new inscription system and I'm very pleased to tell you that due to the large amount of negative feedback it is now cancelled and will be reviewed to hopefully be back in the future.

MrConway, a EU CC Manager wrote today on the forum:

"First of all we want to thank all of you that took the time to not only test the 10.0 update, but also shared your feedback with us. It is important for us that you guys understand that we do care and listen to this feedback and pass it on to the developers.

As you might have noticed, two of the new features in particular received a large amount of negative feedback. We took this to the devs, made the case for you and are happy to report that decisions were made based on this feedback.

In particular this concerned:

These features will not be included in patch 10.0 as a result. They will be reviewed and reworked and hopefully come back in the future with the issues addressed.

We will be keeping the new and improved customization UI, as well as the new Steel Hunt game mode with the new maps.

Please make sure to keep sending us feedback when issues like this come up!"