the first volunteer day of the FV3805 Restoration was a success! 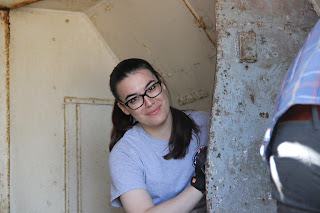 When Jingles and I arrived at the Wight Military & Heritage Museum a shift group was taking a break and got shown around the museum with a guide who explained a little bit about everything they have in display and as soon Ed Francis, one of the heads of the project and who works in the Bovington Tank Museum spotted us he rushed with a mysterious bag, he had inside a "Tanker Mechanic started-kit" (overall, Tool-kit belt and tools) that he gifted me. I felt so radiant!

I'm the type of woman who gets very pleased with such gifts and very happy that the Tool-belt didn't fall down to my feet, this one been wearing overalls and using tools since and while other girls were still playing with Barbies but no tool-belt would fit while helping Grandpa (who enjoys buying old car/motos to restore and then drive them like a lunatic thought the family properties with Rock music screaming out of his very 90's radio) and fixing my own Karts. Father just got tired of fixing them himself and taught me all I couldn't figure out of my own. Often would be dropped at the Kart circuit with my box/garage keys, and spend my weekends/holidays keeping my machines in good condition and only asking help to the staff to lift the back wheels and push the Kart forward for manual start-ups (Start-up switches and Recoil starters are for pussies!) until I was big/strong enough to do it myself! The Kart Circuit Staff were always pleased to help as they adopted me as their tiny girl mascot who would test and steal the manly-hood of 30-50 year old man by beating their times in racing competitions. It was evil but somehow enjoyable to see some reaching the point they would lose control of their Karts while desperately trying to not be passed or catching up with me. :P
Its safe to say... My family expected their first of my generation (me) to be a boy.

Many people showed up and worked incessantly the whole day in and on the "bae" FV3805. We actually managed to do way more in a day than anything we had planned/expected and according to Ed Francis 65% paint was stripped, hatches greased, engine inspected, gearbox eyeballed, floor plates changed and a fossilized cat was found and looked like it had spent a couple decades in there (Cool cat chose a badass urn to die in!)

- Apparently Wargaming recently acquired a Sentinel tank in the US and are returning it to Australia after restoration;
- According to product manager Maksim Chuvalov, WoT has not reached its peak of popularity yet;
- The total number of players registered in Wargaming products on all platforms together is 150 million;
- Next branch will be Czechoslovakia, there will also be a "Škoda factory" map, Berlin map and Studyanki map (Polish map from the movie Four Tankmen and a Dog);
- The December patch will feature a complete overhaul of the game that will concern all players;
- WG is developing two new maps that will bring unusual and previously unseen environment and elements;
- According to Maksim Chuvalov, WoWs will be a successful game - even now the player increase is akin to the one of WoT, although they don't expect it to reach the level of success of WoT.

Almost finished - tier 9 awaits! Right then. To understand the "funny" history behind the T 50, we first need to have a look at the rest of the TVP program. For what "TVP" actually is, please read part 8 or the dedicated TVP article (which is somewhat obsolete, but good as an overview). The entire program ran from 1945 to roughly 1950 (there are indications that some elements might have been developed even later, like the gas turbine engine for Czechoslovak tanks on which Alexej Surin was working in his twilight years). The whole program had multiple stages:

Random note: Dubánek (the "usual" source) tends to write the names of the T series with a dash (T-50), while the actual archive plans usually don't have it. WG chose on my recommendation to uphold the original designation.

Okay, now you might be a bit confused. T 50 is written in the official Wargaming branch as a tier 9 when I am writing there are no plans for it (or, rather, they came too late)? How can it be? Well, there's a story behind that - and a good one.

PlasmaFyre received this cake for his birthday: dragged myself to the PC for share the Screenshots of the Centurion X for you, having a massive cold: