Thank you to José Olivença!
I usually don't post things like this but it really brightened my morning:

U.S. Marines, PT Fuzileiros and other NATO troops staged a mock amphibious assault on Portugal's coastline on Tuesday as part of the alliance's biggest exercise in 13 years but there a tiny bit that some media is not telling and that Portuguese couldn't resist making fun of...

It all starts on a beach with the arrival from 2 hovercraft from the USS Arlington who weren't able to land at first attempt as the beach was too steep requiring them to go back out to sea and try again and once they were ashore, their robust Humvees tried to disembark and got bogged in the sand!


The best video I could find but couldn't embed it on the blog: http://observador.pt/2015/10/20/nato-atascada-pinheiro-da-cruz/

This is pure gold for the Portuguese humour, people been commenting on social media things like : "Nothing stops the Marines! Well, except Portuguese sand... What they think this is? Iraq? This is Portugal my friends! Its hardship!"

Of course they didn't meant it seriously and this was a good exercise to share tactics, techniques and procedures and the marines expressed that it was a pleasure to cooperate with Fuzileiros. :) 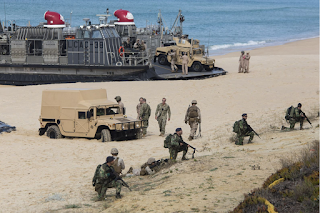 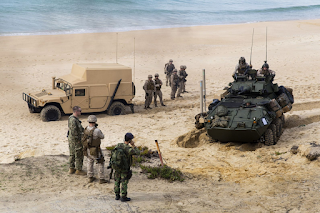