About the Hungarian emblems, insignias and colours in WoT

Hello everyone, I’m Karika, a Hungarian military historian, responsible for some of the Hungarian related articles from Silentstalker's FTR – For The Record website.

Today, we take a look at how the probably soon to be implemented Hungarian Toldi III light and Turán III prototípus medium tanks should look like in WoT, as upcoming premium vehicles of the German tech tree. Because, as some of you have noticed, they are slightly wrong right now.

One of the first thing you might notice on the HD renders from the links above is that those tanks are painted with the standard German grey colour and have the Balkenkreuz - the emblem of the Wehrmacht - on the turret sides and on the hull front. Some of you even took objection to it on various forums and social networks, rightly.

Why is this a problem? As you might guessed, these things are completely unhistorical, not even a single Hungarian-made tank recieved German paintings or insignias, all of them used original Hungarian ones. And why not make a tank as historical as possible if it would not require too much effort?

We do not know yet if these are the finalized versions of the tank models (probably not), but if they are, it would be a bit lazy from the developers to use the basic German settings, don’t you think? There already are tanks in the game which have different colours or emblems from their original tech tree siblings. Such as the German Panther/M10 with its American colours and white stars or the green T-55A with the East German coat of arms or the Type 64 with the Taiwanese ’blue sky with a white sun’ emblem. Therefore such mechanism, which allows to have different visuals from the rest of the tree already exists in the game. Probably it would not be hard to use this method on the Toldi and the Turán.

But how the Hungarian tanks should be look like then exactly? Let’s see:

The two problems with them are that they are not Hungarian and they are not on the right positions on the tanks on the renders above.

However, because the Royal Hungarian Army used at least 9 different emblem variants on its armoured vehicles between 1938 and 1945, choosing the right one is a bit tricky. To simplify this topic, let’s just take a look only on the two major and most widely used ones during the Second World War.


has entered into service right after the Hungarian occupation of the Yugoslav territories have started in the Spring of 1941. This was the first attempt to create a unified, official emblem for every units of the Armoured Divisions. According to the original order, this emblem had to be painted on both sides and on the top of the turret, and on the front and the back of the hull on every armoured vehicles with 500 mm or 350 mm width, as you can see on these pictures: 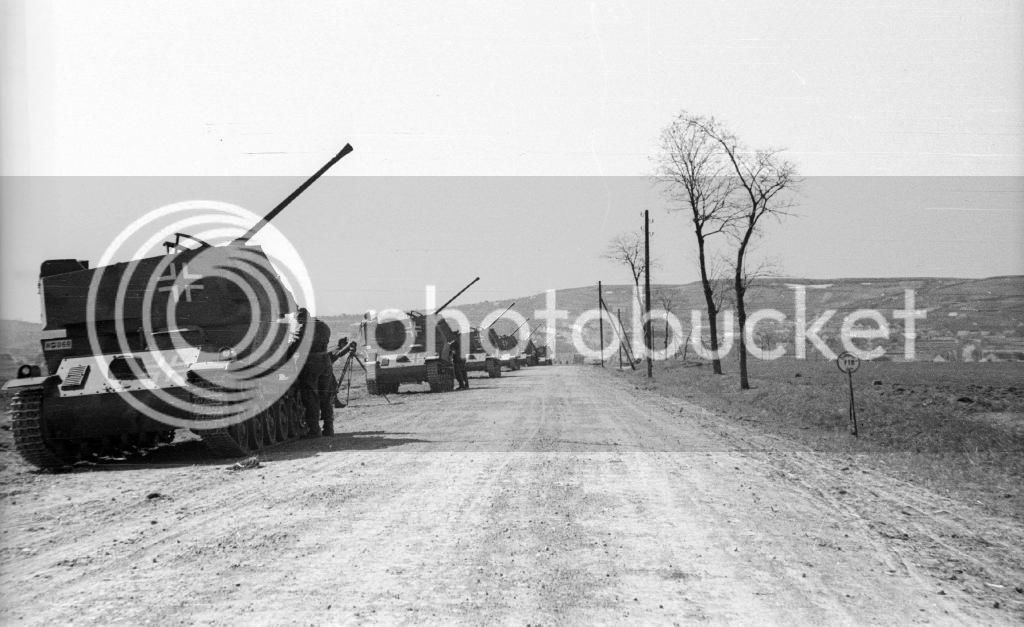 Nonetheless, soon after its introduction, the drivers of the Csaba armoured cars, the Toldi light tanks and Nimród self-propelled autocannons started to criticize this insignia, because if you take a look at the picture above, you’ll see that the driver is sitting right behind that big bright cross, making him feel like he’s sitting behind a huge crosshair, which shouts „Shoot here!”. This did not really improve the morale of the troops, so along with other reasons, the Hungarian Military Leaderboard soon decided to change this emblem.

On 16th November 1942, an order was given out to change, unify every emblem of the armoured vehicles with the emblem of the Hungarian Air Force, a white cross in a black square. This new insignia had to be painted on the hull sides and on the engine decks in a fitting size of the given space according to three different scaling. But it was not required to be painted on the turrets of the vehicles.
However, it was unofficially forbidden to paint it on the front of the tank, thanks to the previous experiences.
This emblem was in use until the end of the WWII.


Therefore, since the prototype vehicles of the Toldi III and the Turán III were finished after the Autumn of 1942, the logical emblem for them is the latter white-black one in the game. The positions should be also correspond to the original ones, as you can see here: An emblem on the sides of the hull below the turret, and maybe (an optional) one on the engine deck. The front emblems must be removed from the in-game models in this case.

Base colour
The solution of this issue is simple. WG only have to paint the Hungarian tanks to their factory green colour, something like this: Camouflage
There are even interesting camo patterns for these Hungarian premium tanks, so they don’t even have to rely on the German ones here either. I’ll just show a few of them here. Conclusion
The developers of Wargaming.net could easily make the Hungarian tanks, along with even the Swiss Panzer 58, upcoming German tier 8 premium tank and the other upcoming tanks of the minor tank producing countries more historical, authentic or from a point of view, even prettier if they take the trouble, and model the emblems and the colours of these vehicles right. Let’s hope they’ll do it.