Well it’s finally time for another instalment of the Swedish tanks series. But first I want to apologize for the lack of articles from me. I have been busy collecting data on the Swedish medium branch for WG and simply have not had that much time left over, anyhow lets get this article started.

In the early 60s the vehicles in use by the Swedish infantry divisions were quickly becoming obsolete. Many had been acquired during ww2 and their age and variety meant that they shared little to nothing in the way of the spare parts. Not only that but they also lacked the firepower necessary on the modern battlefield. In an attempt to replace these vehicles the Swedish army started a project called Ikv ny. After setting up the requirements they contacted the three Swedish companies still developing armored vehicles to come up with proposals for the project. In 1965 a after 16 different proposals had been evaluated the army decided to go with one of the proposals from Hägglunds & Söner.


Hägglunds had come up with a number of proposals, most of which were perhaps a bit too optimistic in terms of performance. But after scrapping ideas for autoloaders and remote turrets the vehicle that remained would be cheap (for tank standards) have most of its major components shared with the Pbv 302 armored personnel carrier and meet the requirements set up for the Ikv ny project. The Hägglunds proposal had proved marginally more expensive than some of the other options but offered the advantages of a fully traversable turret and that it could more easily be converted to an amphibious vehicle. As per Swedish naming convention the vehicle had been named after its armament and its intended role, this gave the vehicle the designation Ikv 91 standing for infantry gun carrier with 90mm with the 1 standing for it being the first of its type. The question of the main armament itself had in fact been solved early on in the project. A compromise had been made between the price and the performance of the weapon. In the end a 9cm low pressure gun had been chosen to make use of the existing ammunition developed for the Pvpj 1110 recoilless rifle. The secondary armament consisted of a pair of 7,62mm machineguns, one of which was mounted coaxially and one of which was mounted on the turret for air defense. However the main armament was seen as the weakest part of the vehicle and later there would be numerous attempts to improve it. 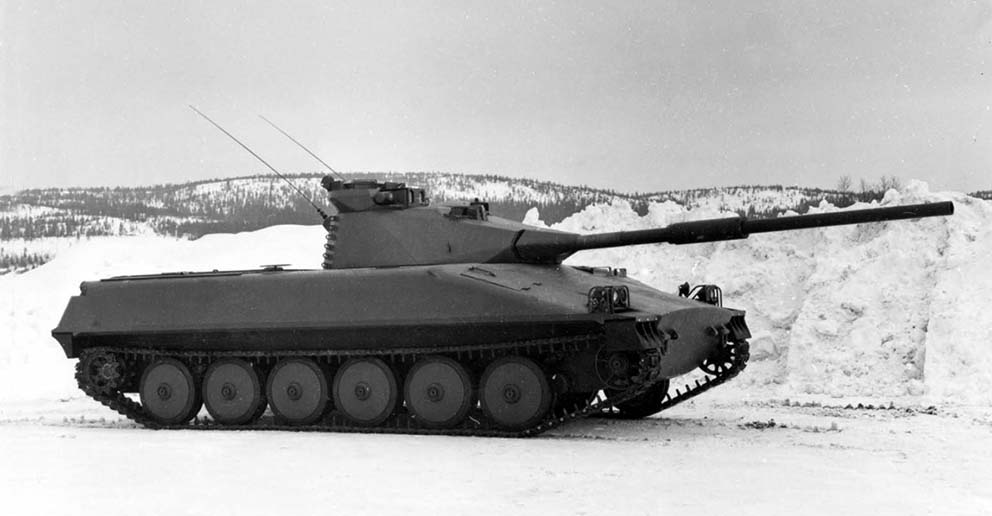 In 1968 the Swedish army placed an order for three prototypes, the first of which was completed by late 1969 with the other two following in early spring 1970. These prototypes were equipped with a complex fire control system, the commander’s cupola was equipped with a laser rangefinder and a ballistics computer. This allowed the commander to detect and range a target for the gunner. Initially the prototypes lacked a lot of the equipment that was later retrofitted like the swimming gear and side skirts. The trials with the prototypes continued for several years and eventually lead to a order of 212 vehicles by the Swedish army. The production version followed in 1974-76 and had only some minor changes compared to the prototypes. The most noticeable change was the lack of the huge commander’s cupola but there was also changes done to the layout of the engine deck. In general however performance stayed the same although the production version was heavier at 16,3 tons compared to the 14,5 tons of the prototypes. 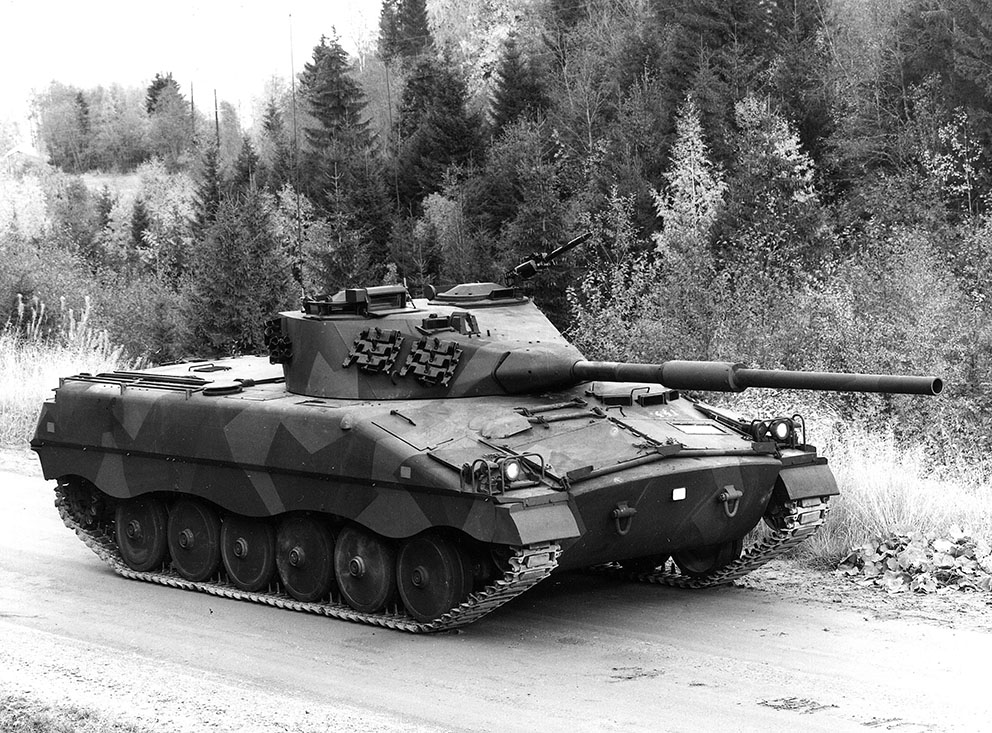 The armor of the Ikv 91 had been one of the things sacrificed in order to keep the vehicle light and amphibious. This meant the ikv 91 ended up with a maximum thickness of 20mm in the lower front with side and rear armor no thicker than 8mm, although some parts were 4mm thick and covered by 8mm of spaced armor. The engine that had been selected for the Ikv 91 was a 330hp turbocharged Diesel engine which was essentially an upgraded version of the engine already in use by the Pbv 302. The low weight coupled with the powerful engine gave the vehicle an excellent power to weight ratio of over 20hp/t. This allowed the vehicle to operate in parts of the country where tanks couldn’t normally be used due to the harsh terrain. The high engine output also gave the Ikv 91 a respectable top speed of 70 kph on roads and flat terrain. The Ikv 91 was crewed by 4 men, a driver placed in the left front of the hull, a Loader and gunner placed in the left side of the turret with the commander on the right. The 9cm low pressure gun allowed the Ikv 91 to provide infantry with direct fire support with HE against soft targets even in rough terrain thanks to its good mobility and its 10dg of gun depression, and it would also be able to engage enemy tanks with the use of HEAT rounds

In 1971 even before the vehicle had entered production questions were raised about its main armament. The low pressure gun would not allow the use of APDS ammunition and the performance of HEAT rounds was thought to be heavily negated on future tank designs by the use of stand-off armor screens. Because of this one of the Ikv 91 prototypes had its turret removed and was reworked into a test rig with a 105mm L7 gun borrowed from a Centurion. At roughly the same time plans were drawn up for an improved ikv 91 under the designation UDES 14D which would feature better armor and a new turret capable of mounting the L7 gun. This project would later lead to at least 2 different prototypes. In the 1983 a prototype was actually produced as a private venture by Hägglunds in an attempt to sell the vehicle to India. The changes to this version included the ability to fire its main armament while floating and also improved speed in water. But despite being tested by several countries no orders were placed. Hägglunds however kept improving the design and in the early 1990s they produced another prototype, this time for the Swedish army which were planning on upgrading fleet of Ikv 91’s. The project however fell tough as funding was cut following the fall of the Soviet Union. This version became known as the Ikv 105 even though it was never officially acquired by the Swedish army. Unlike the previous prototypes this version was equipped with a Rheinmetall 105mm gun rather than the L7 but was otherwise similar in performance to earlier models. Interestingly this model was also trialed by the US marines but this never led anywhere either. 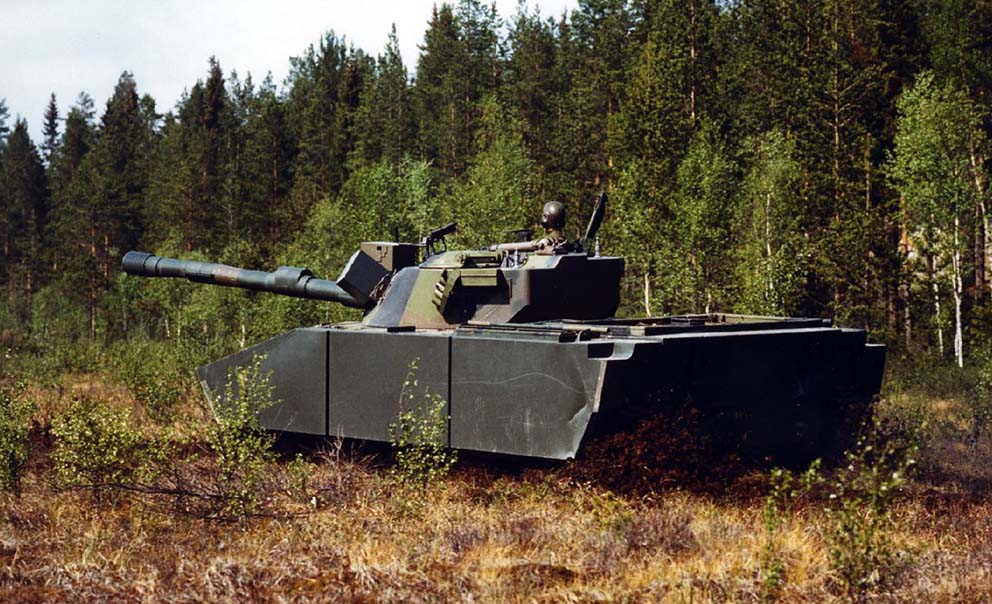 And so with no money left for the upgrade and with the bad protection of the vehicle all Ikv 91’s were taken out of use by the Swedish army in 2002. Some last ditch efforts were made to convert the vehicles into mine clearing vehicles or mortar platforms but these were also canceled. Today a number of vehicles still remain in various museums, most notably Bovington and the Arsenalen museum which actually has one of the prototypes and two production vehicles. Overall the Ikv 91 was a pretty good vehicle, it did meet its requirements and it was a fairly reliable vehicle as well. However in the end it’s lacking firepower and protection along with budget cuts lead to its early death.

Although you might think it’s a bit odd the Swedish army actually considered this vehicle a tank destroyer rather than a light tank. Therefore I have it listed as a tier 8 tank destroyer in my TD branch proposal. In this role the vehicle would be rather similar to the British Charioteer in that it would be a poorly armored but fast vehicle that would be using the 105mm L7 gun as its top gun. Of course due to Wot’s somewhat arbitrary tech limitations the Ikv 91 in game would be representated by prototype version with the UDES 14D turret and 105mm L7 as upgrade options. Perhaps not an ideal situation but definitely a workable solution in my opinion.

As for what is next from me i dont really know what to cover next, maybe some more UDES project or the projects leading up to the Bkan 1 but dont expect anything too soon. Anyway i hope you liked the article.