About the tier 1 candidates Right, the Kolohousenka. A bit of history here:

This horribly ugly vehicle was amongst the first attempts to combine wheel and track propulsion in order for the vehicle to have the advantages of both. It is a design from the mid 20's. The name means in Czech "wheel-track" (the old name for tracks in Czech - "housenka" - is the same word meaning "caterpillar" in English) and that's really what it was - the wheels were supposed to be used during long transports on paved roads, the tracks were to be used only during combat operations and during offroad movement. The main reason for the development wasn't only the speed of the vehicle on the roads, but also the fact, that the tracks from the 20's tended to break a LOT, eg efforts were made to reduce the stress on them as much as possible. While the most famous wheel-track system is probably the one from Walter Christie (used later on the BT series of Russian vehicles), Czechoslovak army decided do buy the more complicated system from the famous German designer, ing. Heinrich Vollmer, which was really a combination of two suspensions: a wheel suspension capable of lifting and lowering itself, and the track suspension from the Hanomag WD-50 tractor. The ramps on the side of the vehicle served to ease the transition from wheels to tracks and it took roughly 15 minutes for the vehicle to be converted from wheels to tracks and vice versa.

The army passed the purchased production rights to three companies, which produced the first two prototypes (intended to be artillery tractors at first) designated KH-50. The trials weren't satisfactory however - one of the vehicle had to be scrapped because it was completely worn out very soon, the other was converted into a tank (see on picture) by adding a round turret with a 37mm infantry gun. Later this was replaced by twin heavy machine guns and there were even plans for a 75mm howitzer. This conversion was accepted by the army under the designation of KH-60, but by that time it was already judged as obsolete and serial production was never considered. The vehicle stayed in service for 5 years (1925-1930) and was used for training, after that it was effectively turned into a monument and never used again. Funnily enough, German tank manuals from 1939 still stated it was an active type in the Czechoslovak army. KH's were exported too - two KH-60's were exported to Soviet Union in 1927 and one to Italy in 1930. Although Kolohousenka was deemed a failure, Czechoslovak army didn't stop in trying to create the combined vehicles by itself. However, by 1930 the license for Vollmer's suspension already ran out and further attempts to develop such a suspension by themselves were met with failure yet again.

In summary - what we have here is a project from the 20's to create a "tank" that would have both wheeled and tracked suspension.

But why this vehicle as tier 1?

My very, very early proposal actually mentioned something different - the FT-17. The FT-17 was essentially the first tank the Czechoslovak army ever had and it served for quite a long time. But obviously, we already have that in the game. More than once actually. Furthermore there were no specific upgrades to the vehicle if I recall correctly so that would make it a pure clone. Not a really good choice (if historical).

There were two more candidates for tier 1 - Praga YNH and Praga MT. Both were very early projects of tanks and both were - in a way - meant as improvements to the FT-17 (the inspiration is clearly there): 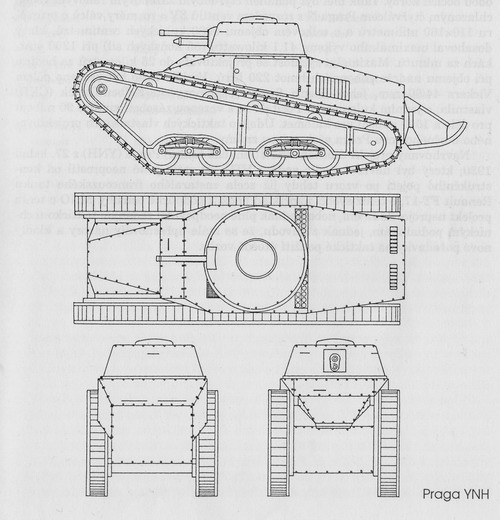 You can see the similarity of the suspension. Unfortunately these vehicles also lack any historical upgrades (they were proposals, never really built) and they really wouldn't perform all that well (you can read about them here http://ftr-wot.blogspot.cz/2013/02/eu-tree-alternative-tier-1-praga-mt.html).

And so the only remaining very early candidate was the Kolohousenka. Now, there wasn't just one. There were three actually - KH-50, KH-60 and KH-70. The vehicle in the game will be a hybrid (Wargaming screenies say "Kolohousenka KH50" but this is incorrect). It has a hull from KH-50 and two turrets - one from KH-50 and one from KH-70 (including the armament). With that being said, its characteristics will likely have more to do with KH-50 than KH-70 but - still. Let's have a look at it in details. Keep however one thing in mind: the vehicle is not yet modeled (this process will start likely in early September).

Oddly enough the in-game model is missing the wheels, which is a bit of a shame but it's possible, the wheels could be completely removed. Apart from that the model looks historical (for the early stage it is in).

Crew: 2 (driver and commander/gunner/loader)
Weight - likely to be similar to KH-50 since WG used the hull: 7,9 tons (maybe a bit more in the elite configuration but not much).

Armor - obviously extremely thin, even for tier 1. This is made worse by the unsloped surfaces. This armor really won't stop all that much but at least the front is partially sloped and as such should be able to keep up with the rest of the tier.

Mobility - there are three engines available for the vehicle:

Let's say the weight is kept at 7,9 tons, this would give us "stunning" 8,86 hp/t in top configuration! That's really not all that much but it's not a complete disaster (stock Leichttraktor has for example even less). On the other hand, this vehicle is SLOW. Its maximum speed is historically 18 km/h on tracks (if we use KH-60 and KH-70 values, it's just 15 km/h for KH-50). This would make it the slowest tier 1 in the game (the next worst is probably Renault FT with 21 km/h) and it's possible that the speed will be unhistorically buffed at least to that level. As you can see, the mobility is really not all that good. Fortunately, it gets better.

Firepower - as far as I know, two guns are modeled for the vehicle: Škoda 37mm infantry gun (L/27) and early 47mm Vickers. No automatic cannons! Both guns could potentially have relatively high alpha, especially the Vickers. The Škoda gun is more or less a standard very early 37mm gun, think of the 37mm of Leichttraktor, the performance is likely comparable:

The Vickers is however more interesting. For one, the gun is already in the game! It can be found on the Chinese tier 2 ("Vickers Mk.E Type B") as the "47mm Vickers QF" - funnily enough the gun is seriously buffed in the game when it comes to performance (especially the penetration which in real life was like... one half).

In reality, we have here something of a derp gun for tier 1. Low penetration (unless artificially buffed again, which I suspect it will) but relatively lots of damage. Expect poor accuracy as well from the top gun.

What we have here is something that will probably play like the British tier 1 - slow, possibly more than average hitpoints and not very thick armor but adequate firepower to compensate. While it won't be the best choice for any good performance play (I assume), the vehicle is already becoming popular on Russian market due to its curious name that can be twisted in various ways to produce pretty funny results: "Kolkhozenka" (Kolkhoz is a Russian collective farm), I also saw "Kolkhuysenka" ("khuy" means penis) and other variants. It will certainly become one of the iconic vehicles of the Czechoslovak tree due to its unusual looks.