tonight can't sleep, just finished working on one Armored Warfare article for next week and I'm thinking - let's just continue the series. Who knows when I will have time to continue.

Right, tier 4 - ST Vz.39. Now we are getting into the medium tank. First, a little bit of history so we know what we are talking about. 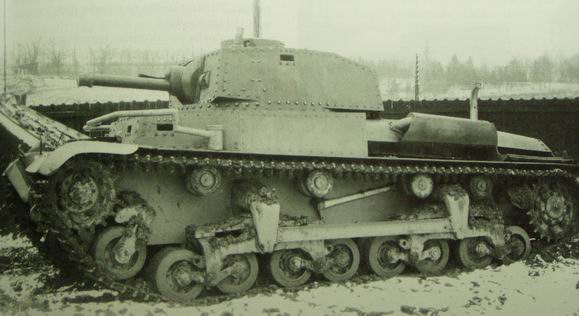 The V-8-H was the first completely independent construction of ČKD Praga. It was the result of the experience, gained by ČKD during the Šp-IIb cooperation in the mid 30's (a prototype of Šp-IIb was built in 1937). Škoda, however, being the main competitor of ČKD wasn't really that much interested in cooperation and pushed its resources into what would become the T-2X line of vehicles (specifically the T-21 medium tank). Seeing that didn't make ČKD too happy and a decision was made to make an independent medium tank as a competititor to the upcoming T-21 vehicle. The result was the V-8-H (the factory designation means V-8 engine, H - tracked) and it did inherit the best parts and experience of the Šp-IIb. Unfortunately, it did inherit some of its flaws too (namely an unreliable engine and weak final drive).


The prototype was built and tested from summer 1937 for roughly 6 months. The tests went rather fine and subsequently the project was offered to several countries, including United Kingdom, China, Denmark, Egypt and many others. However, the interest in the vehicle wasn't high for two reasons: first - funnily enough, for its time it was considered too heavy (it weighted cca 14 tons at the time, while most bridges of that time could hold vehicles up to 10 tons). It was also considerably more expensive than the Czechoslovakia-produced light tanks. Only Italy, Sweden and Switzerland showed some margin of interest. In late 1937 however, the Czechoslovak army decided to run official tank trials both in infantry tank and cruiser tank categories. V-8-H took part in these trials and emerged as clear victor of its category (unlike the Škoda's Š-IIc, which was plagued by technical problems at the time). At that time (december 1937) the Czechoslovak army felt it needs a medium tank a lot. The Czechoslovak generals, seeing the nazi Germany arm itself by the new Panzer III vehicles felt that the contemporary light tanks aren't just going to cut it anymore. A competition was announced for the new Czechoslovak army medium tank and V-8-H was there to take part. From April 1938 the vehicle was thoroughly tested and changes were made and the tank got heavier, gaining 2 more tons. Almost all the parts were changed and improved, including the engine, armor and drivetrain.

By that time, the political climate forced the army to act and 300 V-8-H tanks were ordered. However, the tank crews actually successfully blocked that order, since they felt the vehicle was not very reliable (in that time it was believed that the people who would actually operate the tank have to have the last word and that their opinion is the most important one of all). This, along with the fact that ČKD was unable to strike a deal with Škoda (who wanted to produce it under the official designation of ST Vz.39 or Střední Tank vzor 1939) for the manufacturing capacities eventually doomed the tank. The production didn't start until Czechoslovakia was seized by Germany. The Germans eventually took the prototype and tested it, but decided against it. The only other country that was interested was Romania - Romanians tested the V-8-H against the Škoda T-21 vehicle. The tests were effectively a draw, the Škoda tank however suffered a massive drivetrain breakdown. Despite that, it was the Škoda vehicle that was ordered by Romanians (no vehicles would be delivered for political reasons either way). The fate of the prototype is unknown, but it stayed in ČKD's factory for the rest of the war and was scrapped soon after it.

There was an interesting episode with Sweden however and I will get to that in further text. But before we talk about the tank itself, we have to answer one specific question:

Škoda T-21 was - as mentioned above - the competitor of V-8-H and unlike this Praga tank, it was actually mass-produced in Hungary - that's right, Turán is an improved version of the original T-21. The setup of this tree has to be regarded in the WoT historical context.

When I first assembled this rough setup, it was still during the time when everyone (including Wargaming) thought there will be some sort of mixed branch "European" tree. Naturally, that would mean that the Hungarians - as one of the axis powers and tank producers - would get their own branch (presumably ending with the Tas medium tank - if you have time, have a look at series of articles by Karika on FTR, just find Hungary in the list, they are well worth reading). And such a Hungarian branch couldn't exist without the Turán. But Turán - that's pretty much the Škoda T-21, there would be two very similar tanks in the European tree (the T-21 development - T-22 and T-23 - mirrored somewhat the Turán vehicle upgrades although both programs ran independently) and I suspected Wargaming wouldn't be very happy about it. And of course another reason was that the V-8-H won the contest for next Czechoslovak medium tank.

Early on, V-8-H was also a pain in the ass to find modules for but it was actually "saved" by two people - the guys who are actually preparing the upcoming Swedish WoT branch, Sp15 and Renhaxue. They found plans in the Swedish archives for an uparmored, export variant of the V-8-H, called V-8-H-Sv (you can read about the find here). This was October 2014, the deadline for giving the data was closing in and I was really wondering what to do with this tank because research in Czech sources has proven fruitless (there were a whole bunch of variants - for example, one for Turkey and one for China - but all were essentially weaker than the original V-8-H). The V-8-H-Sv find literally saved my as and ironically by unearthing this tank proposal, they ensured the Czechoslovak tank tree would come before the Swedish tree by removing one of the major obstacles (of course we didn't know that back then).

The entire history with Sweden is quite convoluted. In the fourties (can't remember the date, I think it was as early as 1941), the Czechoslovaks offered this tank to Sweden (at first in the original form, then in the improved form with thicker armor). A prototype was actually built, shown to the Swedes in Prague, they didn't like it all that much and nothing came of it. But here we have an improved version of the vehicle, thanks god for that. Let's have a look at it a bit closer - at the entire vehicle anyway.

We are now on tier 4 and this is where the fun begins. Or stops - depends how you take it.

Alright, that won't stop anyone, especially when the vehicle doesn't have all that much sloped armor (just the heavily sloped frontal armor part but nobody will shoot there). What about the turret?

The elite turret has roughly the same shape as the original one (slightly better sloping actually), resulting in at least some protection against weaker guns. But as you can see, the armor clearly isn't this tank's strong suite.

Firepower and the gun fuck-up

Now we are getting somewhere. When it was first designed, the V-8-H for all its flaws was equal to or superior to early 37mm variants of Panzer III and nowhere was it visible more than in the armament. There were two basic guns to be installed on this vehicle: 47mm A9 and (early on switched to) 47mm A11. If you are wondering what that gun is - it's the 47mm gun that can be found in the game on German TD Panzerjäger I. The A11 was an improved version of the A9 with more pressure and more firepower:

For 1939-1940, completely sufficient. The stock-gun (A9) is a bit weaker. Another stock option was the 37mm A7 (from the Chinese V-8-H variant) but for that tier that would be way too weak. In WoT, the gun's penetration is rated at 62/115/24 (the gold ammunition is wartime developed APCR), which is surprisingly almost completely historical.

The only upgrade for this vehicle in firepower would be the mention from the archives that "the Germans tested it, liked it and proposed a variant with improved German armament". Now, you have to realize this is not an infantry tank per se. It was designed to support infantry, yes, but also to fight enemy armor, that's why it has the long 47mm (to be on par with the Panzer III that was one of the raisons d'etre of this vehicle). Logical improvement would be the German 50mm KwK (it would even fit size-wise).

And ANOTHER alternative improvement would be from the Swedish model. In the Swedish correspondence, the Swedes demanded a 75mm cannon  (Swedish) installed on the vehicle. I had a chat with sp15 and Renhaxue and we agreed that the gun that would be most fitting for this variant would be the Swedish 75 mm L/31 Strvkan m/41 that could fire 6,3kg AP shells with muzzle velocity of 585 m/s. Performance-wise we are looking at something between the German L/24 and German L/43. Nothing spectacular but sufficient for this tier and more importantly, historical.

So, what did Wargaming do?

They gave the tank the German 75mm L/24 as the top gun. Completely unhistorical, they probably just sought to make their job quicker by using an existing model or something. It's complete bullshit, it doesn't fit the spirit of the tank and needlessly gimps it. The variant with 75mm L/24 was never proposed or mentioned anywhere, it's a fake. Who is to blame for this? Well, let me put it like this, there are multiple people I talked to who throw blame from one another but overall it doesn't matter (my personal opinion is that this came from WG historical department after someone had a look at the IIc category and identified it as infantry support vehicles while in reality the doctrine call for more all-round use). What's done is done.

The argument for NOT making the Swedish gun was that photographs are not available (I am not sure about that but - okay). After I heard that argument, I proposed the 50mm instead but - it ended as it did and now it is likely too late to change anything.

Fortunately, the mobility is something that can be used. The vehicle is (also due to its armor) relatively light - we are talking about 16,2 tons in stock and 18 tons elite. Those 18 tons can be powered by:

Besides the top gun fuck-up, I am happy about it. It's a solid vehicle really, not superfast or overarmored but comfortable and has excellent depression and elevation. Were it not for that fucked-up gun, it would be really good - this way I think it might underperform (really, L/24 can't do all that much without the mobility of Panzer III). We'll just have to see.
Posted by Unknown at 01:15