time to have a look at the history behind tier 3, LT Vz.38 - this is the last very well-known tank in the Czechoslovak series and you all know it under the designation of Panzer 38 (t) - hell, it's even in the game. Its history is very well-known - by 1938/1939 it was the best light tank in the world, served with the Germans, many were made, suspension was then used for all sorts of purposes including the legendary Jagdpanzer 38 (t) "Hetzer". I'll skip the details, you can google that. There are several running ones in the world including a restored one in Kubinka. This one will be shown next week in Lešany: 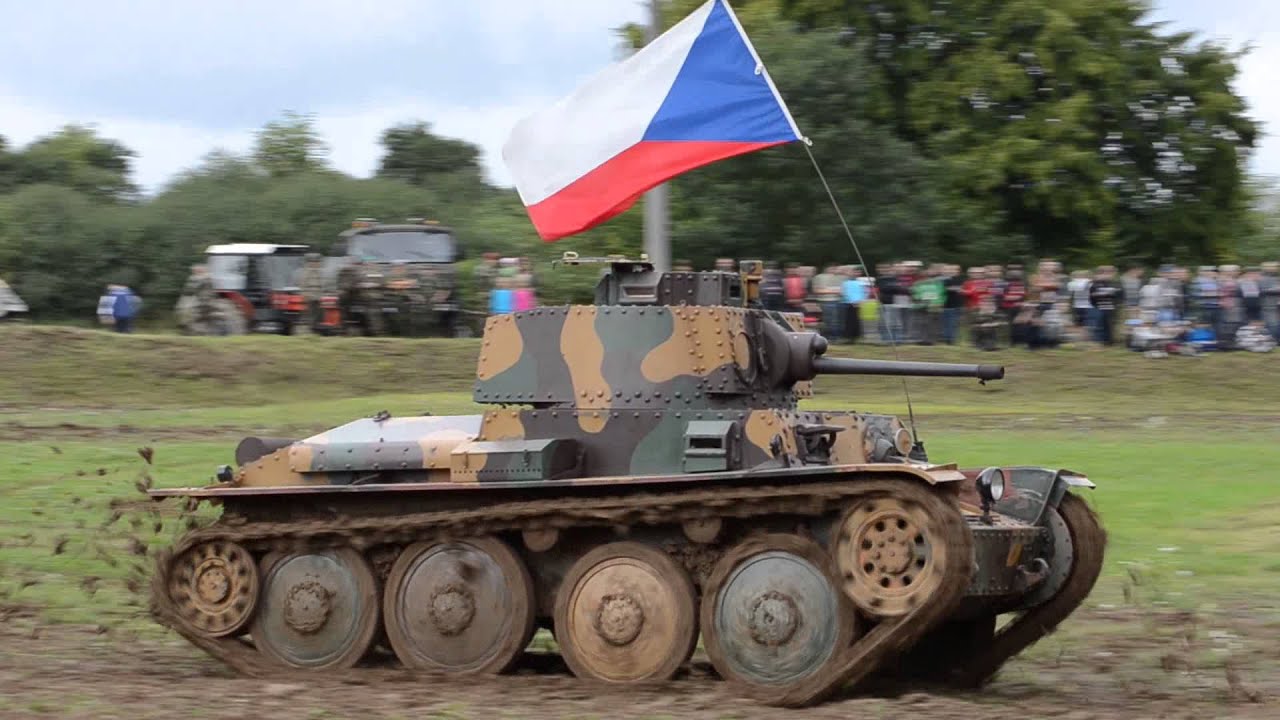 Oh yea, one thing before we begin. Sorry it takes so long to write these, I am superbusy lately and writing one part of the series takes quite some time. The Czechoslovak tanks should start appearing on supertest in around a week and a half to two weeks and by that time I really want this series done (not sure I'll manage it but - when it's done it's done). Right.So, LT Vz.38.

This vehicle was the worst pain in the ass to find a way to implement it in the entire branch.

Okay, tier 9 was annoying as hell as well but this one was just special. Let's start with one statement: in the game, the German Panzer 38(t) is very unhistorical (it uses the wrong model, has fake guns etc.). I wrote about it actually and that article was sort of the "baseline" for looking for LT Vz.38 modules.

You see, the "purely Czech" version of the tank was actually only like one. One gun, one engine, one turret. That's... not a good start. No "purely Czech" upgrades were planned (why upgrade something that's brand new) and further development already took place under German supervision. Even so, no upgunning of the vehicle was to my knowledge planned the entire war, the tank was stuck with the 37mm A7 gun right until the end.

So, what we are missing are:

That's not a really good start. Let's look at the turrets first.

My first thought was to just propose ONE turret. With nothing else - just the classic LT Vz.38 turret, give the vehicle more engine power and create something with less firepower than the ingame 38t but more agile. This wasn't really accepted by Wargaming - Wargaming frowns upon designs with one turret only and will do this only when really, really required. Nope, we have to have an upgrade turret.

That brings us to five lines of thinking.

- my first thought (and wish that was not accepted) was to give the vehicle a Swedish turret. You see, the Swedes bought some numbers of this vehicle and operated it for a very long time under the designation of Strv m/41. In 1943, they produced a variant called m/41 S-II with 50mm armor instead of its usual 25mm. See, a nice little turret with extra armor (50mm) that is not Panzer 38t. The problem with this proposal was that the turret has nothing to do with Czechoslovakia - sure, it's still a LT Vz.38 basis but the improved armor was developed by Swedes only. This tank would thus make more sense in the Swedish branch but my idea that overrode in my mind everything else was: "at least it's not a goddamn Panzer 38t clone!" :) You can read more about the Swedish m/41 here. - second idea that is kinda obvious was to give the vehicle a Panzer 38 (t) turret. Developed in Czechoslovakia for the Germans, that much is true. Still, it's our development. Of course, that would make this vehicle a clone of the ingame Panzer 38 (t), a solution I was really not a fan of.

- third (and rather desperate) idea after spending some time arguing about the previous points was to cannibalize the TNH-57/900 from the light tank branch and give the vehicle a post-war turret that would arguably fit. Of course, the turret existed just on paper and it couldn't have its original gun (automatic 57mm on tier 3 would be really brutal) so they'd have to give it the smaller automatic 47mm from the same series as the 57mm gun. TLDR: this would practically be a fake vehicle and nobody really liked this solution.

- fourth idea was to actually make the LT Vz.38 a TOP turret and use "experimental" turret as stock. Visually it wasn't really different (a rivet here and there) and didn't have any more or less armor, we'd have two almost identical turrets with same performance and visuals, only different names. Obviously even worse solution than the last one.

- fifth idea was to use a LT Vz.35 (tier 2) turret as stock turret for LT Vz.38. Yes, this is historical - such a hybrid (basically just a hull testbed) existed but having the vehicle look like this in its stock form would make too many Czech players cry "fake!" because few know about that combination.

In the end, solution two won and the vehicle will have a Panzer 38 (t) Ausf.G turret as elite. It's really a compromise and a choice from less-ideal solutions. The turret has 50mm frontal armor and forms a solid upgrade over the stock LT Vz.38 one. There's one in Munster to demonstrate how it looked (wasn't that different from the original in shape of course, there's just a different commander cupola and the additional armor plate. By the way the Munster Panzer 38 (t) is a hybrid - engine deck belonged to Ausf. A to F, the turret was originally Ausf.G but the turret frontal plate was taken from some older variant as well, probably during field repairs. Guns were even more entertaining than the turret. The vehicle carried only ONE gun, the 37mm Škoda A7. Not a bad weapon but of course by 1941/1942 it was already obsolete, at least for tanks that were supposed to take on anything heavier than Soviet T-26. There was never even a project to arm it with something heavier - allegedly the Soviets rebuilt captured 38t's to carry their 45mm guns but no photo of such a conversion exists. So, what now...

The first idea for the stock gun came from the TNH-S prototype. Basically it's a prototype Vz.38 that had - instead of the A7 - a mock-up version of the A3 (LT Vz.35 gun, with that big recoil brake cylinder) installed. There are several pictures of that vehicle. In the end, this indeed became the stock gun for the ingame LT Vz.38. A7 and A3 are already in the game by the way:

But of course this does not solve the issue of the top gun. Remember how I wrote above about the autoloaded 57mm? Well, this series of gun had another gun: a long 37mm. Why not use THAT as an elite gun? I already wrote about this proposal in detail in the past. So yes, that's going to be the top gun: a long (L/67!) autoloaded 37mm A23:


How historical this is? Well... the autoloader MIGHT fit the turret but this is a post-war gun and was not meant for such a turret probably. Yes, it's a stretch but not a complete fake. And let's face it: 37mm autoloader, why not. It will likely be quite accurate too. You can read about the gun history here. Oddly enough the modellers (despite the set of references sent to them) modelled this gun wrong (they just prolonged the A7 barrel).

Hopefully they fix that.

And so, the configuration of the vehicle in the game will be:

Engines will likely have to be unhistorical as well as the only really historical one is the 125hp TNHP that could be uptuned to 150hp. For 9,725 tons (historical weight) - it's sufficient but this vehicle won't be the fastest thing on the battlefield (15,42 hp/t, 42 km/h maximum).

And so after much debating the LT Vz.38 was finally balanced. It's not TOTALLY historical like the previous vehicle but it is quite good all things considered. The vehicle won't be very fast but the turret will be sufficiently armored with solid guns (accurate 37mm autoloader) and solid depression (although that will likely be reduced for the top gun into -5). A pretty nasty combination if you ask me.
Posted by Unknown at 13:17