History of the AMX 40

By the time the first Somua S35 tanks were rolling from the assembly lines, the French high military staff already started thinking about their replacements. By the end of 1936, French army issued new demands for the future cavalry tank - these demands included:

Even if they wanted to, there was no way the designers could rework the Somua S35 to fit those requirements. Even the Somua S40 had 5 km/h lower speed with only 40mm of armor. And so these requirements were ignored for three long years.

In the meanwhile, in 1937, John Walter Christie - the famous suspension inventor - started offering stuff to the British. He brought with him two of his projects - one was the M1931 Medium Tank and the other the M1937 Airborne Tank. The trials of those vehicles left a strong impression in the British - so strong in fact that shortly after, the mass production of Cruiser Mk.III with Christie suspension started in the Nuffield plant. With such a notch on his belt, Christie was able to sell his patents to France in March of 1938, but they had to wait for a year before any results came from that - only in 1939, when the French engineers saw the Crusier Mk.III during the mutual military assistance program it became clear to them that Christie's suspension could indeed be successfully applied to a cruiser-type tank.


Their first thought was to copy the Mk.III and to license-produce it. This idea was however scrapped for two reasons. First reason was that for French standards, the vehicle was very expensive. Second reason was that only the maximum speed of the vehicle was sufficient, other characteristics were not that good. According to the French, the 12mm to 24mm armor was too thin and the vehicle could (as a "bonus") not fit on French railway cars. They were also not satisfied with what was basically an aircraft engine powering the vehicle. After thorough studies, the French decided that it would be best to start designing the new cavalry vehicle from scratch.

The company AMX was put in charge of designing this new cavalry tank in early 1940. The team was led by French designer Joseph Molinié, who would later on become AMX's chief designer and after the war, he would eventually be the author of the best-known French post-war tanks. The task however proved difficult, as it required unorthodox means to achieve - the result was quite a complicated vehicle. On 4.3.1940, AMX made a drawing designated 0-387, depicting a tank by the name of Char cavalerie AMX 40. 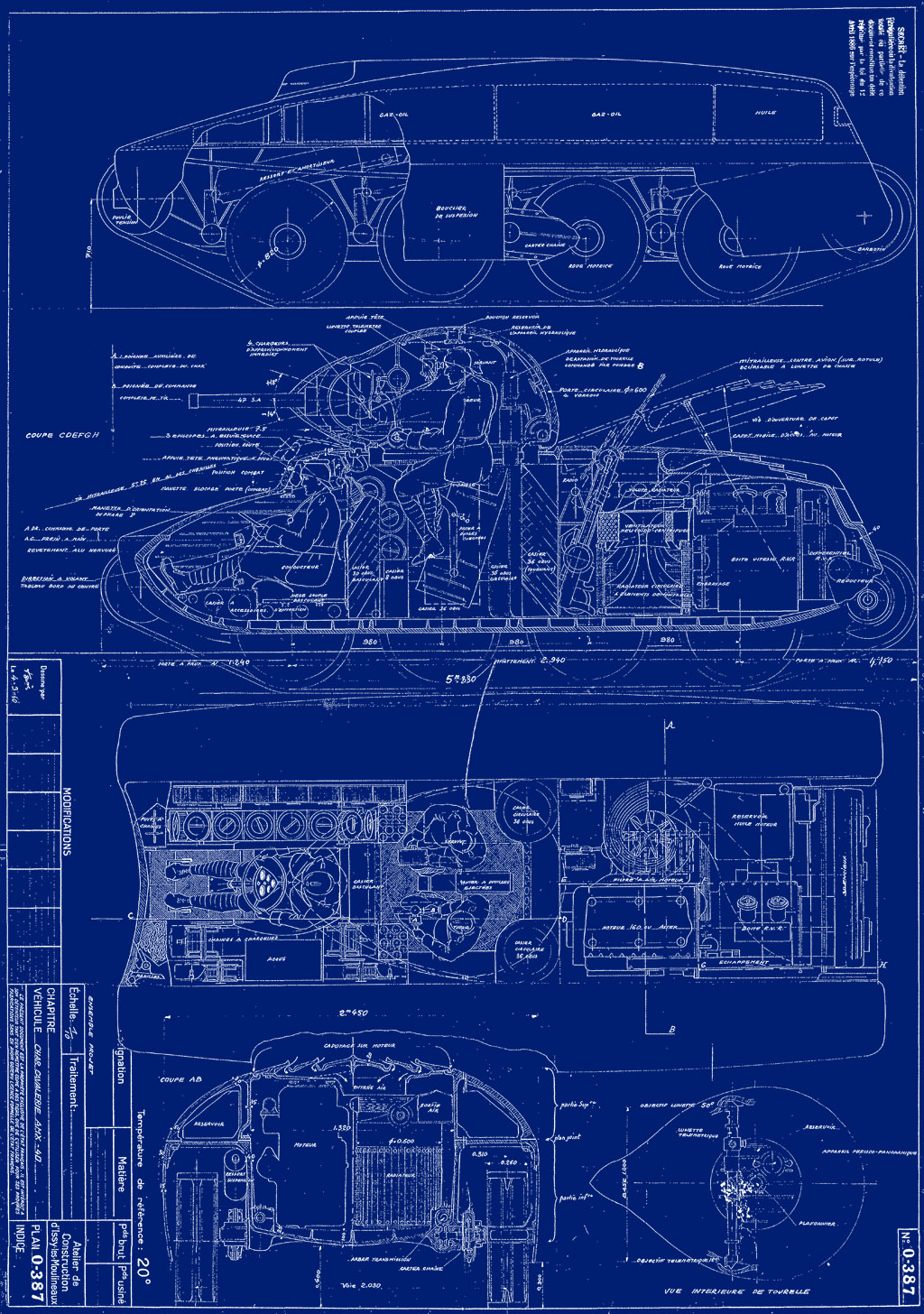 The vehicle was to use the Christie suspension but apart from that, it was purely French. Both the hull and the turret were cast and when it came to layout, the tank resembled R35 much more than it did the Somua. The turret for example was to be two-man. In the meanwhile, the army requirements became even stricter - the frontal armor now had to be 60mm thick. In order to really have this armor while keeping the weight requirements, the vehicle was made very small and very cramped, perhaps even too much. The turret ring was less than a meter wide and the width of the turret was only 1,26m. Two non-breathing Napoleon-sized tankers could probably fit in it but it would be a close call and they would constantly hurt their elbows from hitting the turret sides - the same fate would await the driver.

The vehicle was to weigh 16 tons and was to be powered by a 160hp Aster engine (the same that was earlier proposed for AMX 38). This horsepower would then be transferred via 6-speed gearbox to the rearmost pair of road-wheels. This strange setup was probably a relic of the Christie design and caused some speculations that the vehicle was to be able to operate on wheels only, but Christie himself abandoned the wheel-cum-track solution in 1936. Another Christie issue that the vehicle inherited were very narrow tracks - as such the terrain passability of the vehicle would likely not be very good. On the other hand, for French tanks, the power-to-weight ratio was not so bad (10 hp/t) and as such, the vehicle would likely have the same agility as Somua S35. The planned maximum speed was to be 45-50 km/h.

As per the requirements, the main armament consisted of a 47mm SA 35 gun with a paired 7,5mm machine-gun. Second such MG was mounted on an anti-aircraft pintle, located behind the turret. The 176 gun shells were placed around the turret sides. Apart from all that, the turret also had a rangefinder and gunner's optics device (combined into one). With all that located in the turret, seeing the crew embark and disembark would likely be very interesting (and funny) to watch. In theory, there was a hatch at the back of the turret but in order to get to it, you had to get around the gun somehow. How the driver got into the vehicle - no idea.

French historians proposed theories that the turret was to be replaced in the future by a two-man or three-man FCM turret, originally intended for the Somua upgrades. This is probably just a French fantasy though - there is a difference of around 40cm between both turret rings (the Somua one was 1435mm wide). This idea would work in World of Tanks or on a magazine picture, but not in real life.

According to Yuri Pasholok, the AMX 40 design was so impractical that even if the Germans didn't occupy France, it would have likely stayed only as a paper project, or it would be seriously redesigned, as all that equipment, ammo and two crew members would simply not fit the tiny turret.
Posted by Unknown at 12:43